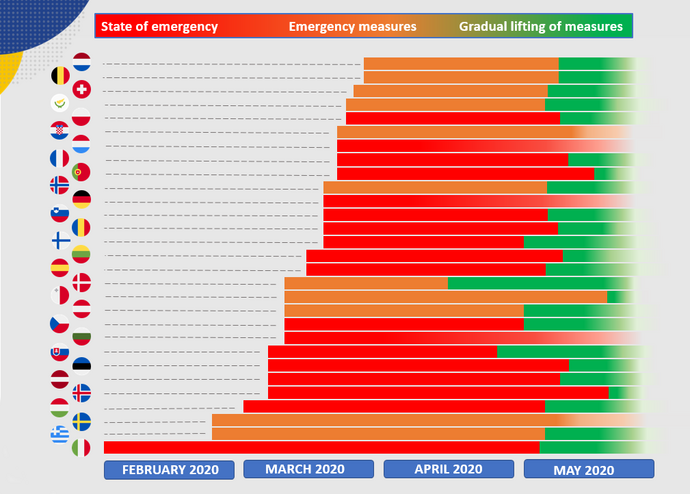 Initially limited by the emergency measures, national asylum authorities largely made strong efforts to resume services wherever possible, often within weeks. At the same time, Member States should be prepared for a possible ‘second wave’, while lessons learnt may contribute to more effective asylum procedures in the longer term.

A new report published by the European Asylum Support Office (EASO) outlines how the asylum and reception authorities of EU+ Member States were impacted by the outbreak of COVID-19 in February 2020. It further describes how national services adapted their working methods in the subsequent weeks and months in order to resume as many activities as possible.

The extraordinary national health measures taken to mitigate the COVID-19 pandemic affected the functioning of the asylum and reception systems of 30 European countries to differing degrees. The impact largely corresponded directly to the extent of the national emergency measures. In most cases, face-to-face services, such as the registration of applications and interviews were temporarily discontinued.

The emergency measures, however, did not necessarily equate to the complete suspension of asylum procedures and services. In more than 20 EU+ countries, asylum authorities continued many services through teleworking arrangements. This is reflected, for example, in the number of first instance decisions issued during this period.

National authorities also took measures to mitigate the impact on asylum seekers, such as by extending deadlines to lodge applications, introducing electronic access to information and communication, as well as automatically extending the validity of documents.

Member States also worked quickly, as well as in coordination with the European Commission and EASO, in order to adapt to the new circumstances. As early as the beginning of April, some authorities began conducting remote interviews. As national measures begin to be lifted, many national services are also resuming those asylum and reception services which could not be adapted.

EASO also issued recommendations on remote asylum interviews, while the European Commission issued guidance on the implementation of EU rules on asylum procedures in the context of COVID-19.

EASO’s report also cautions Member States to assess the procedures which were adapted as a result of emergency measures in case there is a need to revert to them as a result of a second wave. Furthermore, many of the adapted workflows show the potential to improve the resilience of national asylum systems. Member States should make efforts to incorporate these on a permanent basis.