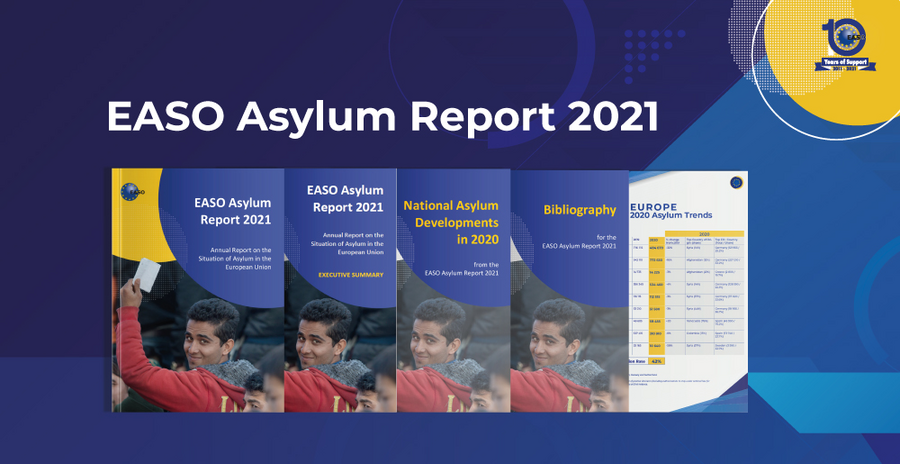 Despite the pandemic, the EASO Asylum Report 2021 highlights the resilience of many EU+  countries’ asylum systems in using innovative solutions for business continuity. Resources were allocated to adapt working methods, implement digital solutions and reduce pending cases. However, shortcomings were also exposed, notably in terms of reception conditions, low returns to countries of origin, resettlement and reduced Dublin transfers.

While two-thirds of all asylum applications in 2020 were lodged in just three countries: Germany (122,000), France (93,000) and Spain (89,000), the impact of arrivals was heightened for countries at the external borders. When considering GDP and population, Cyprus, Greece and Malta continued to be under the greatest pressure to receive and accommodate asylum applicants.

Just over two-fifths (42%) of all decisions granted some form of protection at first instance in 2020 (224,000). Within the positive decisions issued by authorities, 50% of asylum seekers were granted refugee status, 27% humanitarian protection and 23% subsidiary protection.

Nationals of Eritrea, Syria and Venezuela continued to receive positive decisions most frequently at first instance (referred to as the recognition rate). The rate climbed over time for applicants from Afghanistan (from 48% in 2017 to 60% in 2020), Nicaragua (6% to 25%) and Belarus (from 12% to 30%). Many factors played into determining the outcome of asylum applications at a swifter rate. Notably, while states of emergency halted public services in most countries during the initial COVID-19 outbreak, Member States quickly adapted their asylum procedures, including through the use of digital tools. National asylum authorities focused on reducing backlogs and issuing new guidelines to improve practices, for example for the early identification of minors and faster access to legal aid.

To guide the way, EASO and the European Commission issued practical guidance for Member States, including on conducting remote registration and interviews. EASO also doubled its operational support productivity in 2020, and launched a new operation in Spain at the end of the year.

Other areas of the Common European Asylum System came to near standstill. For the first time in seven years, the EU’s resettlement programme, which provides a safe and structured pathway to protection, experienced a significant decrease (-58% from 2019) in the number of refugees transferred to Europe. By the end of the year, most countries had not met their national quotas and postponed their allocations to the following year. However, countries continued their efforts through remote interviews and dossier selections.

Almost three-fifths (58%) of decisions on asylum applications were negative. Already a persisting challenge prior to the pandemic, an increasing number of rejected applicants were not returned to their country of origin due to COVID-19 measures such as grounded flights and closed borders. In response, many EU+ countries adopted new legislation and policies to improve the enforcement and cost-effectiveness of the return procedure.

Other systemic cracks were accentuated with COVID-19 restrictive measures. As authorities reshuffled accommodation to allow for social distancing, some countries had little room to manoeuvre in already-crowded reception centres.