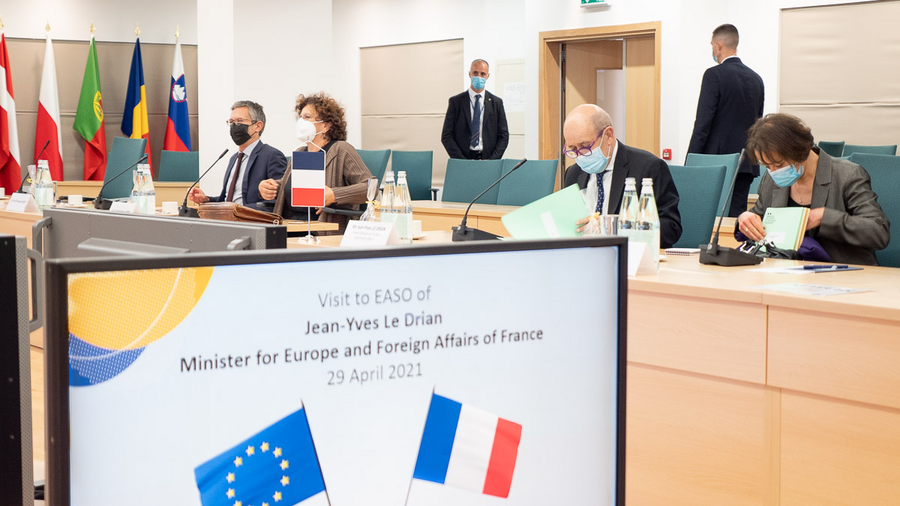 On 29 April 2021, the Minister for Europe and Foreign Affairs of France, Jean-Yves Le Drian, accompanied by the French Ambassador to Malta, Brigitte Curmi, visited the Headquarters of the European Asylum Support Office (EASO) in Valletta. During the visit, the Minister met with the Senior Management of the Agency.

During the meetings, discussions with the French delegation focussed on a general overview of EASO’s activities including EASO’s operational role. Discussions also touched upon the draft Regulation transforming EASO into the EU Asylum Agency (EUAA), emphasising the importance to have the new Regulation adopted swiftly.

Commenting on the visit of the Minister, the Executive Director of the Agency, Nina Gregori stated ‘’It is important that EASO’s activities were presented to Minister Le Drian. I'm confident we will work closely together towards a new mandate for the Agency, also supporting France in the upcoming Presidency.’’

EASO is an agency of the European Union mandated with supporting EU Member States in implementing the Common European Asylum System. The agency acts as a center of expertise on EU asylum procedures and obligations, providing technical assistance and guidance, training and operational support. EASO also works closely with the rotating Presidency of the Council of the EU. In view of the fact that France will hold the Presidency in the first semester of 2022, EASO’s Senior Management also explained the support the agency can provide in this context.