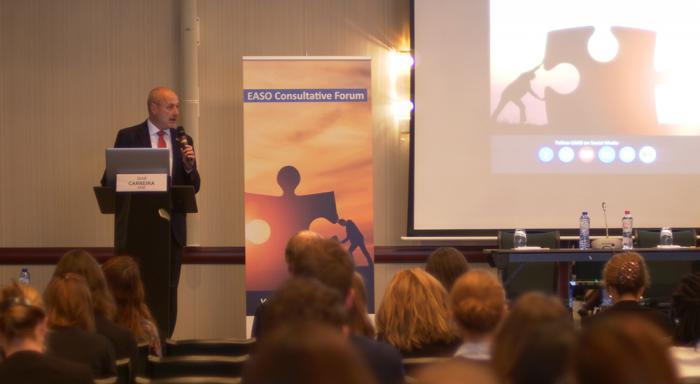 On 17 November 2017 in Brussels, the European Asylum Support Office (EASO) is holding its 7th annual Consultative Forum with representatives from Civil Society Organisations (CSOs), international organisations, EU institutions and national authorities, to discuss the state of play of the Common European Asylum System.

This year’s meeting brings together an unprecedented diversity in stakeholders and a record number of participants, reflecting the prominence that the event has taken in bringing together the principal players in implementing the EU’s asylum system, as well as its added value for all participants. Speaking at the beginning of the event, EASO’s Executive Director, José Carreira, highlighted significance of civil society to the Agency, stating:

“Since its inception, the Agency has grown into a strong operational actor. Activities have grown incrementally, and are likely to further expand and increase in the future under the revised mandate of the EUAA. In this context, cooperation with civil society is more important than ever.”

Today’s meeting is divided into three sessions. The first addresses the support which the EU and EASO have given to frontline Member States, most notably over the past two years where the periphery of the EU has been challenged by unprecedented numbers of asylum seekers.

A second session will focus on how civil society and EASO can continue to improve their cooperation in implementing the Common European Asylum System (CEAS). The session will be divided into three parallel workshops on coordination between EASO and CSOs in hotspots; civil society’s role in ensuring the integration of individuals on relocation; and EASO’s engagement with civil society with regard to information, data analysis, training and asylum processes.

This afternoon’s final plenary session will discuss what the future role for stakeholders will be once EASO becomes the European Union Agency for Asylum (EUAA). Discussions will focus on what changes the EUAA will bring to the Agency’s mission, mandate and activities, as well as how the role of the Consultative Forum will change in this context.

The annual plenary meeting of the Consultative Forum brings together all of EASO’s stakeholders, most notably CSOs, including NGOs, IGOs and academia, in order to exchange information, pool knowledge and ensure that close dialogue is maintained between the Agency and its partners.

The plenary follows other meetings held with civil society earlier this year, including a regional thematic meeting in Trapani, an informal Consultative Forum planning meeting and a workshop on the revised format and structure of the Consultative Forum. It also builds on electronic consultations that EASO has on key documents and more than 110 meetings/activities held with civil society representatives to date.