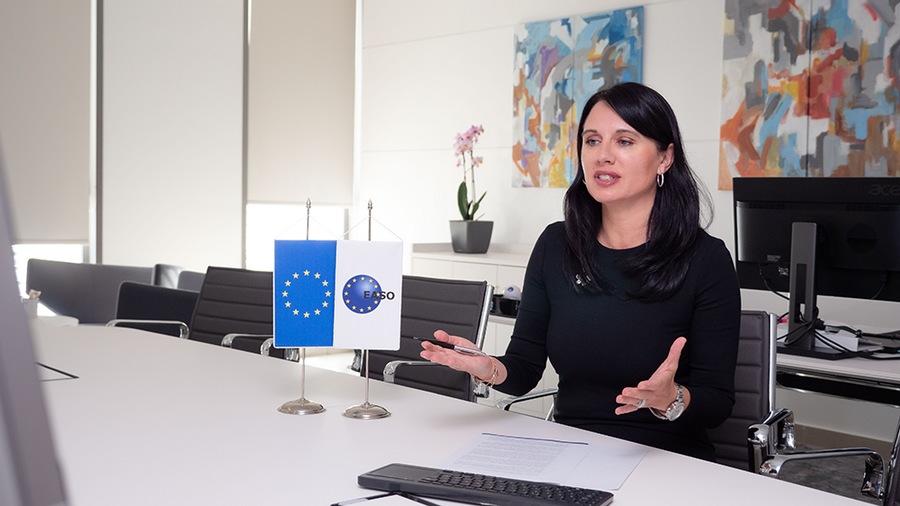 The Executive Director of the European Asylum Support Office (EASO), Ms Nina Gregori, participated at the Vienna Migration Conference 2020 organised by the International Centre for Migration Policy Development (ICMPD) which took place virtually on 18 November 2020. On the margins of the event, EASO and ICMPD virtually exchanged letters which aim at reinforcing cooperation and collaboration.

The Vienna Migration Conference, ICMPD’s annual flagship event, offers a key platform for top-level discussion on migration in Europe and beyond.

EASO’s Executive Director actively participated as a panellist in three sessions at the workshop on “Schengen and EU Asylum: Strategies for Progress”. Ms. Gregori giving her insights on the condition of the Schengen area in times of COVID-19, as well as the reform process of the CEAS.

Speaking at the 1st Session on the State of play of discussions in the EU following the European Commission’s proposal for a New Pact on Migration and Asylum, Ms Gregori expressed her hope that the new Pact and the related Proposals serve as an impetus to take forward the discussions in a constructive way. ‘’It’s an attempt aiming at balancing responsibility and solidarity, and it provides the basis for constructive negotiations that could unblock the stalled discussions,’’ stated EASO’s Executive Director during her intervention. Ms Gregori also referred to the limitations of EASO’s current mandate and the need to progress on the Proposal for a European Union Agency for Asylum (EUAA).

‘’Shedding light on the key issues to be resolved: strategies for progress’’ was the topic of the 2nd discussion, in which EASO’s Executive Director focused her intervention on the border  procedure and the solidarity mechanism.

When enquired on the way forward and whether there are other ‘deliverables’ that can be expected in the short-term, Ms Gregori highlighted the swift adaptation both of EU Member States and EASO to the ‘’new normal’’ caused by the ongoing pandemic and the opportunity that this pandemic has given asylum services to rethink and adapt the way they work effectively and efficiently. Ms Gregori also mentioned EASO’s important work on resettlement, aiming at making sure that legal pathways remain a viable option.

‘’We need to invest more - politically but also practically - in advancing the Common European Asylum System,’’ stated the Executive Director of EASO during her closing remarks. Looking further into the future when all the other proposed CEAS instruments will also be adopted, Ms. Gregori expressed her confidence that the EUAA will be ready to significantly step-up the very tangible assistance being provided to Member States’ asylum and reception practices.

On the margins of the Vienna Migration Conference, the Executive Director of the European Asylum Support Office (EASO), Ms. Nina Gregori and the Director General of the International Centre for Migration Policy Development (ICMPD) Dr. Michael Spindelegger, virtually exchanged letters reiterating their commitment on the close cooperation between both parties.

The long-standing collaboration between EASO and ICMPD in the fields of their respective activities had made clear that there was a need for a joint framework to structure cooperation in matters of common interest. This need was addressed through a series of consultations between the parties, which resulted in an agreement these areas of cooperation.

The letters establish the different modalities and objectives, including the exchange of information and practices. They pave the way for the two parties to continue building on the excellent collaboration to-date, providing high quality expertise in the fields of migration and asylum.

More information on the ICMPD Vienna Migration Conference 2020 can be found here.