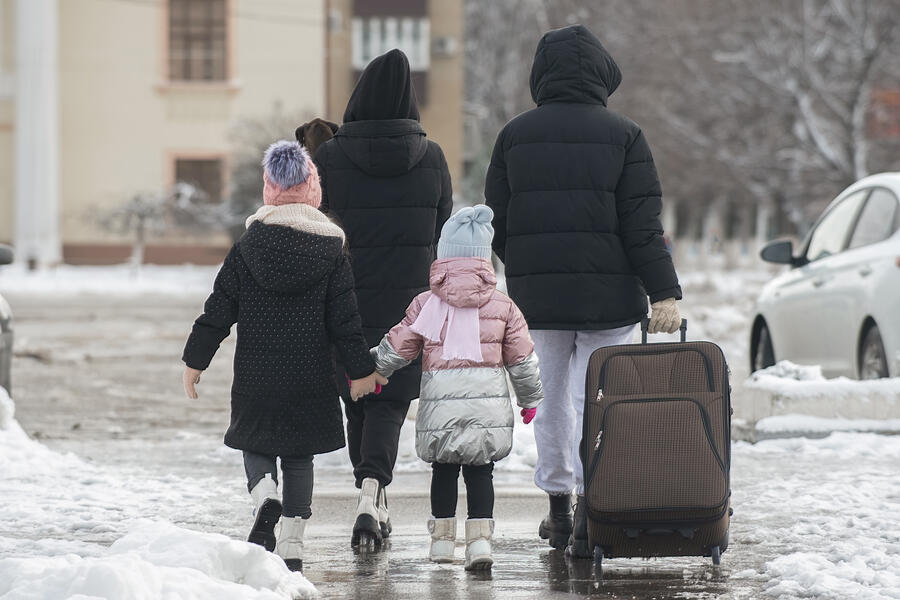 The Russian invasion of Ukraine has caused large-scale displacement to the EU+, the most asylum applications in years, and far more registrations for temporary protection. In total, nearly 3 million persons fleeing Ukraine have registered for the EU’s temporary protection status since the start of the war.

Peaks of both asylum applications and registrations for temporary protection

However, asylum applications alone do not nearly capture the historical dimension of refugee migration from Ukraine, with magnitudes not seen since the end of the second World War. Under the Temporary Protection Directive,[2] those fleeing Ukraine can register for temporary protection in the EU, without having to undergo an asylum procedure. Registrations also peaked in March at 1.6 million. While the pace of registrations has slowed steadily thereafter, at least 50 000 Ukrainians were still registered during the fourth week of May. By 29 May, altogether nearly 3 million persons fleeing Ukraine have registered for temporary protection since the beginning of the war, according to provisional estimates.[3] This number is 140 times as high as total Ukrainian asylum applications over the same period (21 400). 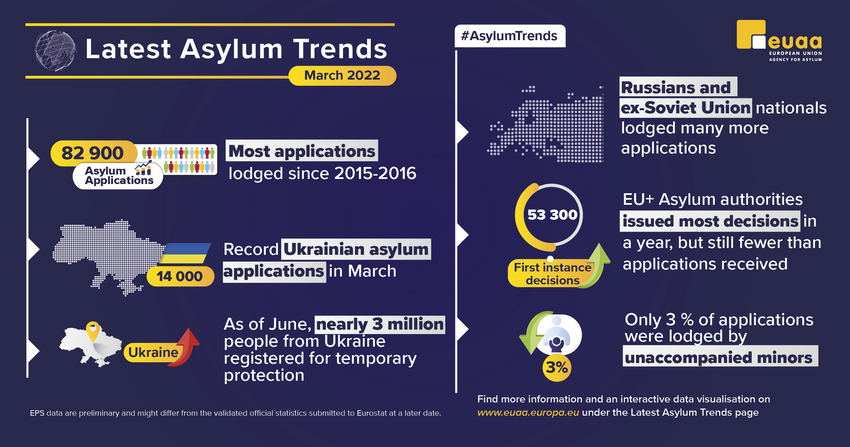 More applicants also from Russia and other former Soviet countries

Sudden increases in asylum applications also occurred for citizens of various former Soviet countries. Asylum applications by Russians (1 400) doubled from February to the highest level since 2018. Even stronger rises, between two-fold and ten-fold, occurred for citizens of Belarus, Azerbaijan, Tajikistan, Uzbekistan and Turkmenistan. It is not clear to what extent these applicants came from their home countries or were residing in Ukraine when the war began. Applications also increased significantly for several African countries of origin, notably Nigeria, Somalia, Egypt, Morocco, Tunisia and Mali.

The most first instance decisions in a year

Asylum authorities in EU+ countries issued about 53 300 first instance decisions in March 2022, up by a quarter from February and the most since March 2021. Decisions issued to Venezuelans were five times as high as in February, and they also increased substantially for Syrians, Afghans and Colombians. However, the overall rise in decisions did not keep up with applications lodged, which exceeded decisions by almost 30 000 in March, the largest gap in half a year. After steadily increasing in recent months, over half a million cases were pending at first instance at the end of March. About half of them were pending for more than six months.

The EU+ recognition rate[4] was 40% in March, remaining significantly higher than the overall recognition rate for 2021 (35 %). The recognition rate for Ukrainians jumped to 47 % in March but this does not yet reflect the surge of applications lodged since the beginning of the war. Some of the highest recognition rates overall arose for Syrians (93 %), Yemenis (89 %), Belarusians (87 %) and Eritreans (85 %). Two thirds of all positive decisions in March granted refugee status, while the remainder granted subsidiary protection.

[1]  EUAA EPS data are preliminary and might differ from validated official statistics submitted to Eurostat at a later stage. Eurostat data are used in the annual EUAA Asylum Report. The total EPS numbers include an approximation for one EU+ country and may change after data updates.

[3]  Based on data on registrations for temporary protection shared with the EUAA and the European Commission.

[4]  This refers to the recognition rate for EU-regulated forms of protection (refugee status and subsidiary protection) at first instance.