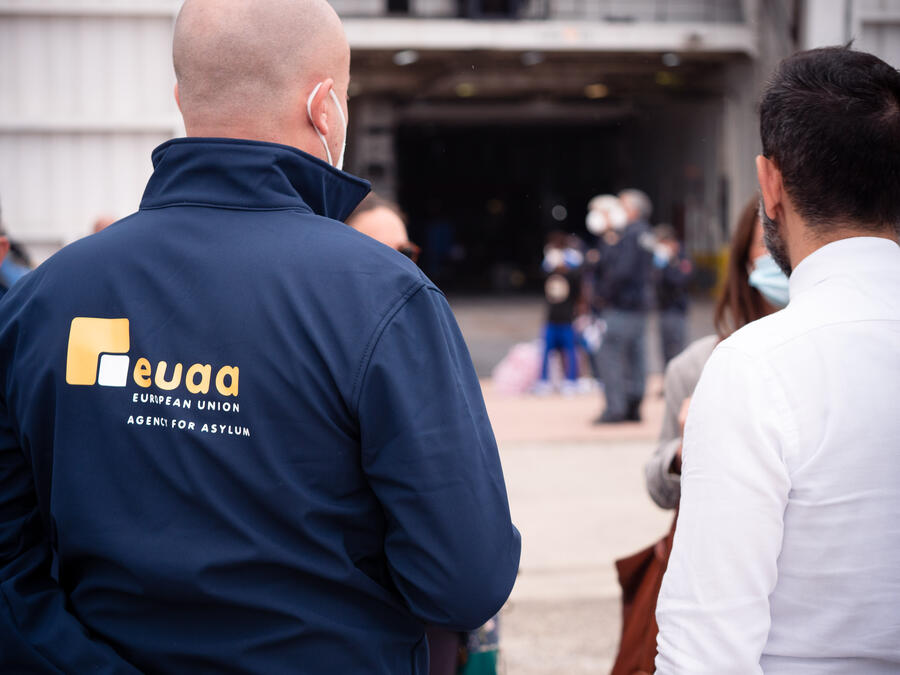 Not seen since 2015-2016, the 100,000-mark of asylum applications lodged in EU+ countries was reached or exceeded in September, October, and November 2022. Syrians, Afghans and Turks continued to apply the most, but levels were high for a diverse set of nationalities.

Analysis released by the European Union Agency for Asylum (EUAA) estimates that about 107 300 asylum applications were lodged in the EU+ in November 2022[1] , after similar numbers were already recorded in September and October. Applications lodged monthly remained at the highest level seen since 2016. Moreover, the build-up and recent clustering of unusually high levels signals mounting pressure on national systems.

Relatively many applications by all main applicant group

In November, applications for each of the main applicant groups were high relative to the monthly levels recorded since 2017, i.e., after the refugee crisis of 2015-2016. Most applications were lodged by Syrians (some 17 700) and Afghans (14 900). Turks (8 300) remained the third largest applicant group and continued to apply in increasing numbers. They were followed by Colombians (4 900) and Venezuelans (4 800) who led the trend of increasing applications from nationals of Latin America. Among others, applications lodged by Bangladeshis (3 900), Moroccans (3 100) and Georgians (3 000) also reached record highs. 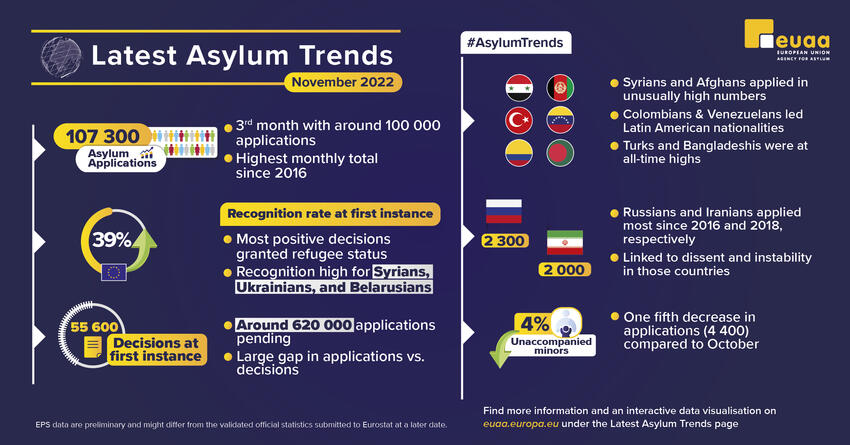 More applications by Russians and Iranians

For the third consecutive month, Russian nationals (2 300) applied in increasing numbers, representing the most since 2016. This is likely due to the “partial mobilisation” announced by Russia in mid-September in the context of its invasion of Ukraine, and comes as the EUAA presents two Country-of-Origin reports on military service and political dissent in the Russian Federation.

Applications by Iranians (2 000) reached their highest number since 2018. This could be a result of protests across the country in the wake of Mahsa Amini’s death in religious police custody in mid-September, as well as the execution of several Iranian protesters. In contrast, the number of Tunisian applicants declined significantly (2 000), after rising almost continuously during 2022. This trend reversal likely reflected a change in Serbia’s visa policy towards Tunisians in order to align it with EU policy.[2]

EU+ asylum authorities issued some 55 600 first instance decisions in November, remaining roughly stable since June. During this 6-month period, however, applications have increased considerably. In October, the gap between applications and decisions had reached its widest point since 2015 (52 900) and remained almost as large in November (51 700). This translated into more cases pending at first instance – some 619 500 at the end of November, a new high since 2017.

The EU+ recognition rate[3]  was 39 % in November, with some 12 100 applicants being granted refugee status and 9 600 receiving subsidiary protection. As has been the case in recent months, recognition rates were especially high for Syrians, Ukrainians, Belarusians, Yemenis, Malians, and Eritreans.