Turkey to an EU+ country. For the period 2016-2025, a total of €6 billion has been allocated through the Facility for Refugees to support refugees and host communities in Turkey, focusing on humanitarian assistance, education, health, municipal infrastructure and socio-economic support. An area in which more progress is needed is the implementation of returns from the Greek islands to Turkey.

The disembarkation of migrants rescued in the Mediterranean Sea continued in 2019, underlining the need for a more systematic and coordinated EU approach to disembarkations including first reception, registration and relocation. A Ministerial Meeting on Migration in September 2019, involving Member States, the Presidency of the Council of the EU and the European Commission, led to a Joint Declaration of Intent concluded by France, Germany, Italy and Malta for a structured emergency procedure to manage disembarkations and relocation arrangements. The European Commission launched a process to develop Standard Operating Procedures based on the declaration, which led to a common understanding among Member States and which is being applied operationally.

Resettlement remained high on the policy agenda related to asylum during 2019. It is an integral component of the collective efforts by the EU to provide protection to those who need it by transferring refugees from an asylum country to another state that has agreed to admit them and ultimately grant them permanent settlement. The European Resettlement Scheme was launched in July 2015 and, as of December 2019, two successful resettlement programmes have assisted more than 65 000 people.

Throughout 2019, the EU continued its cooperation with external partners to manage migratory pressures through a comprehensive approach rooted in multilateralism. The aims of activities implemented under the external dimension of the EU migration policy included preventing irregular migration; enhancing cooperation with third countries on returns and readmission; addressing the root causes of migration by improving opportunities in countries of origin and increasing investments in partner countries; and ensuring legal pathways to Europe for those in need of international protection.

In its role to ensure a harmonised interpretation and application of EU law, the Court of Justice of the European Union (CJEU) issued 12 judgments in 2019 related to preliminary rulings on interpreting the CEAS. For example, the Court ruled on:

The Court also interpreted key concepts and technical aspects of the Dublin system in light of the Charter of Fundamental Rights of the European Union and clarified preliminary issues as a result of the withdrawal of the United Kingdom from the EU (Brexit). 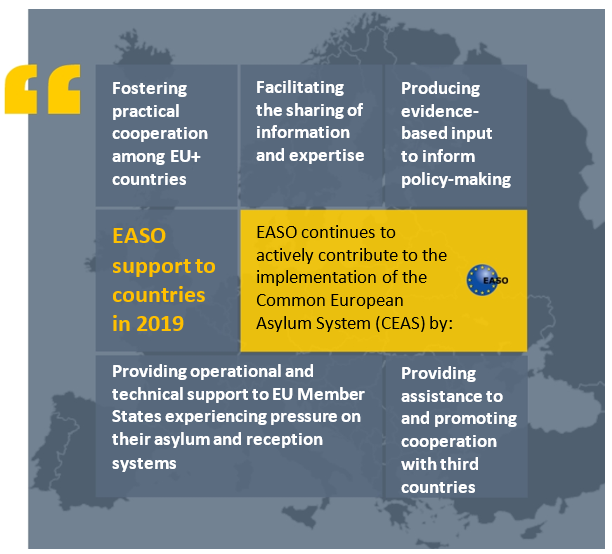 In the area of third country support, EASO delivered capacity-building activities in 2019 in Western Balkan countries, Turkey and countries in the Middle East and North Africa (MENA) region.