Figure 1. Number of applications by top receiving countries in Europe, 2018-2019

In 2019, EU+ countries issued approximately 585 000 decisions on first instance applications. This indicated a continuation of the declining trend in the number of decisions rendered on applications for international protection since 2016. Five countries accounted for three-quarters of all decisions taken on international protection: France, Germany, Greece, Italy and Spain. Most first instance decisions were issued to nationals of Afghanistan, Syria and Venezuela, accounting for one-quarter of all decisions in EU+ countries in 2019. Applicants from Venezuela, Colombia, El Salvador, Palestine, Tunisia, Morocco and Yemen received significantly more decisions in 2019 compared to the year before.

Two-fifths of all first instance decisions were positive, that is, granting refugee status (accounting for more than one-half of all positive decisions), subsidiary protection or humanitarian protection (granted in almost equal shares).

A noticeable development in 2019 was the number of positive decisions granted to applicants from Venezuela. The recognition rate for Venezuelans was 96 % in 2019, compared to just 29 % in 2018. Other nationalities with high recognition rates included: Syrians (86 %), Eritreans (85 %) and Yemenis (82 %). In contrast, applicants from North Macedonia and Moldova received the lowest proportion of positive decisions, at 1 % each.

The number of applications that were withdrawn in 2019 rose by 20 % to reach approximately 69 500. Withdrawn applications, especially implicit ones, can serve as a proxy indicator of absconding and the beginning of secondary movements towards other EU+ countries. EASO’s provisional Early Warning and Preparedness System (EPS) data suggest that almost three-quarters of all withdrawn applications at first instance in 2019 were implicit. Consistent with this interpretation, most withdrawals took place in frontline Member States, such as Greece and Italy, which together accounted for more than two-fifths of all withdrawals.

At the end of 2019, close to 912 000 applications for international protection were still awaiting a decision in EU+ countries, representing almost 1 % more than in 2018. Overall, the backlog was still much higher than pre-crisis levels, which illustrates the heightened pressure under which EU asylum systems are currently operating. Germany continued to have by far the most open cases, but in contrast to many other EU+ countries, there was a reduction in the overall number between the end of 2018 and 2019. The stock of pending cases was considerable and growing in Belgium, Greece, France, Spain and the United Kingdom. Calculations based on Eurostat and EASO data highlight that more than one-half of the cases awaiting a decision, or over 540 000, were pending at first instance. In all countries with significant increases in the number of pending cases, the trend was largely driven by the fact that more applications were being lodged, and thus, most of the backlog was accrued at first instance.

Figure 2. Pending applications for international protection in EU+ countries, at the end of the year, 2014-2019

Top 20 countries of origin of applicants for international protection in EU+ countries, 2019 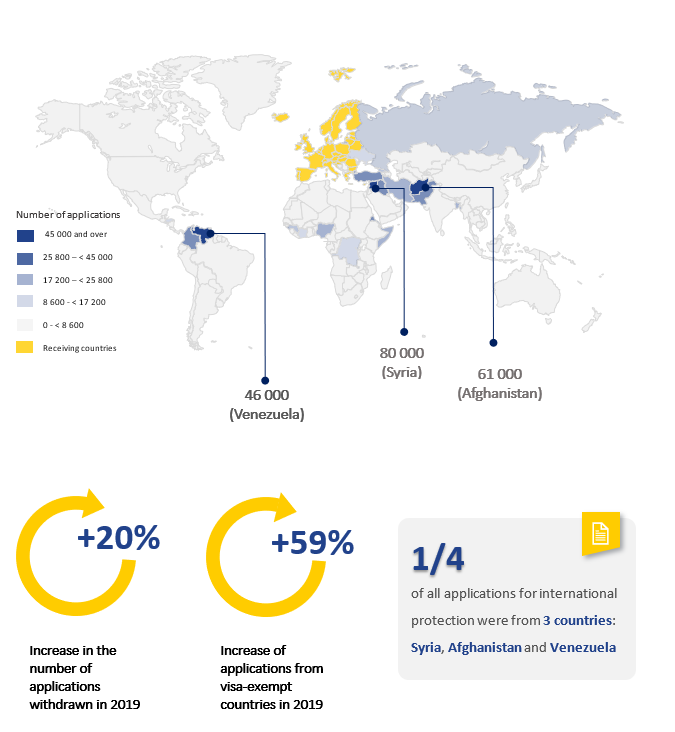