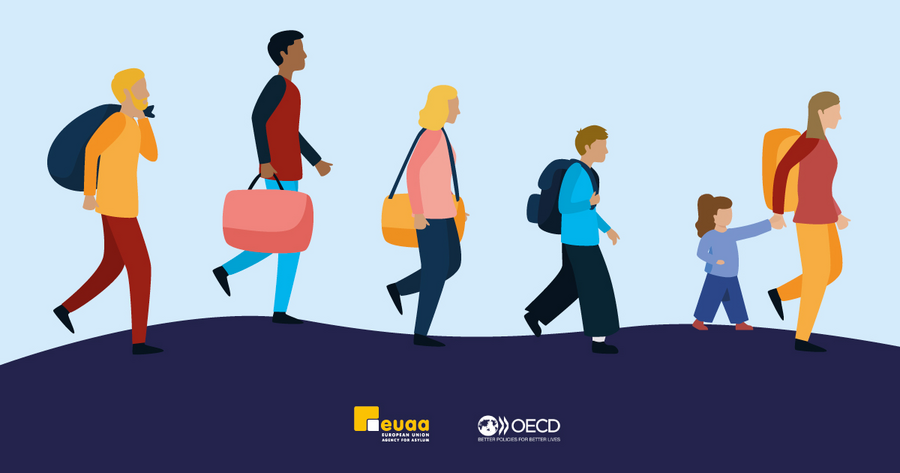 Today, the European Union Agency for Asylum (EUAA) and the Organisation for Economic Co-operation and Development (OECD) present the initial results of a Survey of Arriving Migrants from Ukraine. As the United Nations reports that over 100 million people are displaced by violence worldwide, the results will help tailor national responses to the needs of Ukrainians that have sought refuge in Europe.

Europe and its citizens gave help to those in need

Since the start of Russia’s invasion of Ukraine, 5.7 million Ukrainian citizens have fled to the EU. According to the EUAA’s latest analysis, nearly 3.4 million have registered for Temporary Protection, which grants access to healthcare, the labour market and state education (for minors).

Most respondents had reached their preferred destination (84%) when they participated in the survey, and indicated having used a bus, train or their own car to travel. The plurality of respondents sought accommodation in private housing, hosted by a national family (29%); or from family members and friends (20%). A stay in a reception centre came only as the fourth most common answer (13%).

The decision on which country to seek shelter was primarily based on the local presence of family or friends and work opportunities (chosen by 50% and 49 % of all respondents, respectively). Czechia – where the EUAA is now providing support – Germany and the United Kingdom were cited as the top 3 countries of choice, by those who had not yet reached their preferred destination.

Based on the Likert scale (a scale of 1-5), respondents rated their overall satisfaction with regard to access to legal services and medical care (3.2 out of 5, each), children’s education (3.4 out of 5), while living conditions were rated highest at 3.6. Protection-related information, as well facts about the journey, were mainly sought from social media. This was followed by traditional media, NGOs and grassroots organisations; fewer still used government websites.

Based on 2,369 eligible responses received between 11 April and 7 June 2022; 96% of the displaced people providing their feedback were Ukrainian citizens (4 % were non-Ukrainians) residing in the country before Russia’s invasion. Over four fifths are women aged between 18-44 years old, with just 2% over the age of 65. Most of the respondents are highly educated, with nearly three quarters holding a bachelor’s or master’s degree and were travelling with their minor children. 77% were employed when the conflict began. Other than Ukrainian, the most common languages were Russian and English, followed at a distance by German, Polish, French. 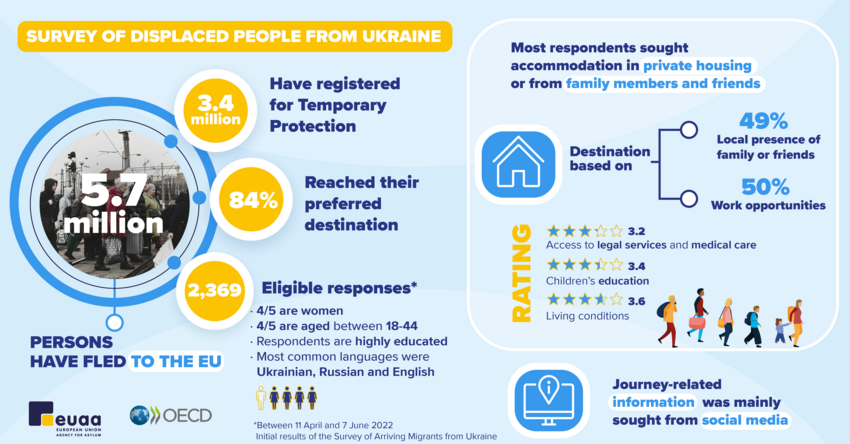 The EUAA, in cooperation with the OECD, will conduct a broader analysis of the persons displaced from Ukraine, and endeavour to better understand their situation in Europe. With the International Organization for Migration (IOM) reporting that over 7 million people have been internally displaced in Ukraine, the EUAA will also seek to learn more about returns to Ukraine and future migration flows to Europe. This in-depth analysis will, in addition to the ongoing survey, include a broad variety of quantitative and qualitative data.

The data collected will be used to provide situational updates to European policymakers and will enable local services to be better tailored for refugees from Ukraine.

A factsheet with the central findings derived from the survey can be downloaded here.

The EUAA in partnership with OECD launched the Survey of Arriving Migrants from Ukraine (SAM – UKR) on 11 April 2022. The goal is to collect standardised data across EU+ countries directly from the people fleeing the war in Ukraine who have sought shelter in Europe.

Both anonymous and voluntary, the survey aims to learn more about their journey into the EU, their vulnerability, needs and future aspirations. It also seeks information on issues encountered with registration, as well as their current and family situations. The survey is available in Ukrainian, Russian and English.