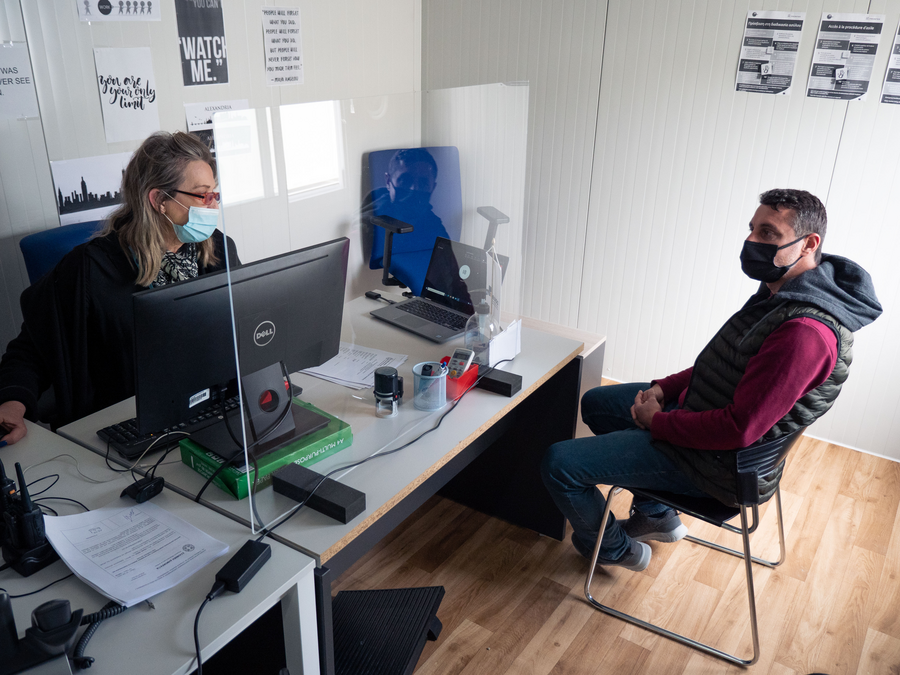 In August, asylum applications in the EU+ reached a new high since 2015/2016. This reflected more applications lodged by a range of nationalities, but especially by Afghans and Syrians, many of whom use the Western Balkans route. At the same time, efforts continue to manage the arrivals of persons displaced by the Russian invasion of Ukraine and prepare for the winter.

After EU+ countries received unusually high numbers of asylum applications between May and July, this trend has accelerated. Analysis released by the European Union Agency for Asylum (EUAA) shows that about 84 500 asylum applications were lodged in the EU+ in August,[1]  a new monthly record since the so-called “refugee crisis” of 2015-2016. Both Afghans (12 100) and Syrians (11 900) lodged around 30 % more applications, driving an overall increase of 16 % from July.

Increased applications were also recorded for a broad range of citizenships in August, including Turkish (4 600), Indian (4 200) and Moroccan (1 900) applicants. Bangladeshis (3 300) applied the most since 2015 and the numbers for Pakistani, Tunisian and Georgian applicants, among others, remained consistent with recent trends. 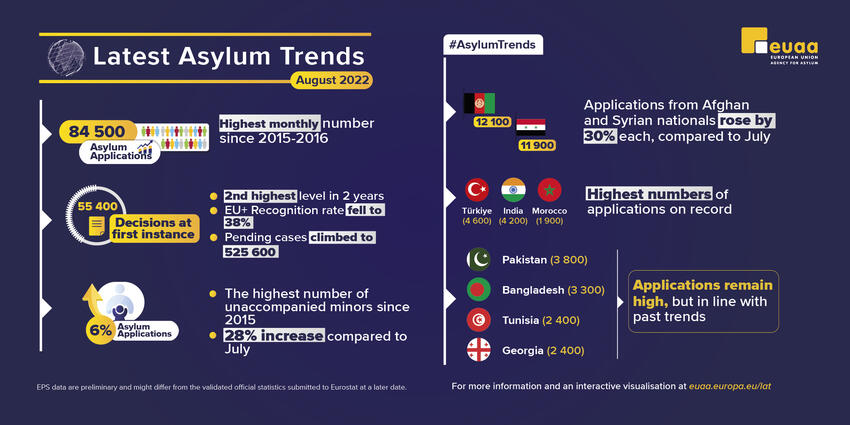 The numbers of applications recorded in August 2022 corresponds to around half of the number observed between September and November 2015 (i.e. 170 000). As in 2015-2016, the Western Balkans route appeared to play a key role in recent developments. An EUAA report on Afghan nationals in 2022 found that they were mainly using the Western Balkans route into the EU, and detections of Syrians on this route doubled between April and August of this year.

At the same time, large numbers of persons fleeing Ukraine continued to register for temporary protection status[2]  in EU+ countries, stretching reception systems in several Member States. Some 255 000 registrations for temporary protection were carried out in August, almost exclusively of Ukrainian citizens. By 6 November, almost 4.7 million registrations had been recorded since the Russian invasion began.

Taken together, asylum applications and registrations for temporary protection have surpassed 5 million in 2022 so far. 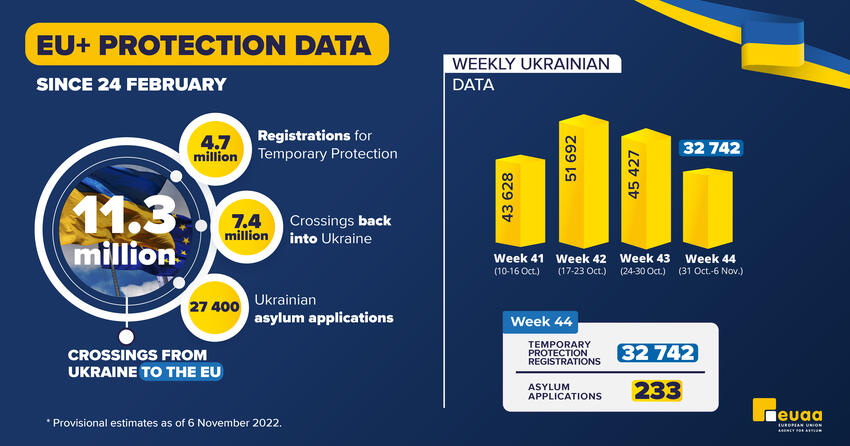 A new high of unaccompanied minors

The number of applications by self-claimed unaccompanied minors jumped to almost 4 700 in August, which is up by 28 % from July – a new high since 2015.

Unaccompanied minors represented 6 % of all applicants in August, up from 4 % as recently as June. The main drivers of the latest increase were unaccompanied minors from Afghanistan and Syria, both increasing by 40-50 % from July.

In line with the recent surge in applications, half of these cases had been waiting for a decision for less than six months. The EU+ recognition rate[3]  was 38 % in August, the lowest in seven months but still higher than the average in 2021 (35 %). Recognition rates were especially high for Ukrainians, Syrians, Yemenis, Malians, Eritreans, and Belarusians.