The following is a summary of the relevant conclusions concerning the situation in Nigeria:

These armed conflicts are presented in the map below. 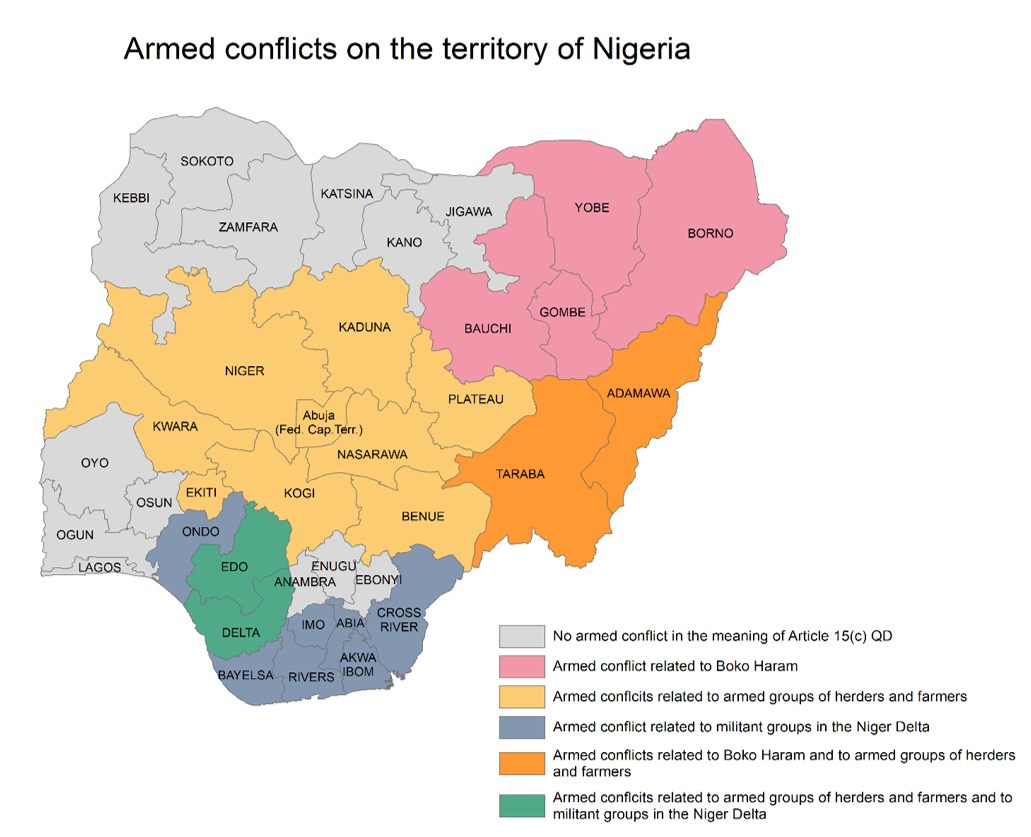 b. Civilian: Article 15(c) QD applies to a person who is not a member of any of the parties to the conflict and is not taking part in the hostilities, potentially including former combatants who have genuinely and permanently renounced armed activity. The applications by persons under the following profiles should be examined carefully. Based on an individual assessment, such applicants may be found not to qualify as civilians under Article 15(c) QD. For example:
■ Boko Haram members
■ Members of armed groups of farmers or herders
■ Militant groups in the Niger Delta
■ Members of the CJTF
■ National security forces, including NAF, the Nigerian Navy, the Nigerian Air Force, and NPF.
It should be noted that actively taking part in hostilities is not limited to openly carrying arms, but could also include substantial logistical and/or administrative support to combatants.
It is important to underline that the assessment of protection needs is forward-looking. Therefore, the main issue at hand is whether the applicant will be a civilian or not upon return. The fact that the person took part in hostilities in the past would not necessarily mean that Article 15(c) QD would not be applicable to him or her. For example, the assessment should further take into account whether the person had voluntarily taken part in the armed conflict; those who willingly joined the armed groups are unlikely to be considered civilians. 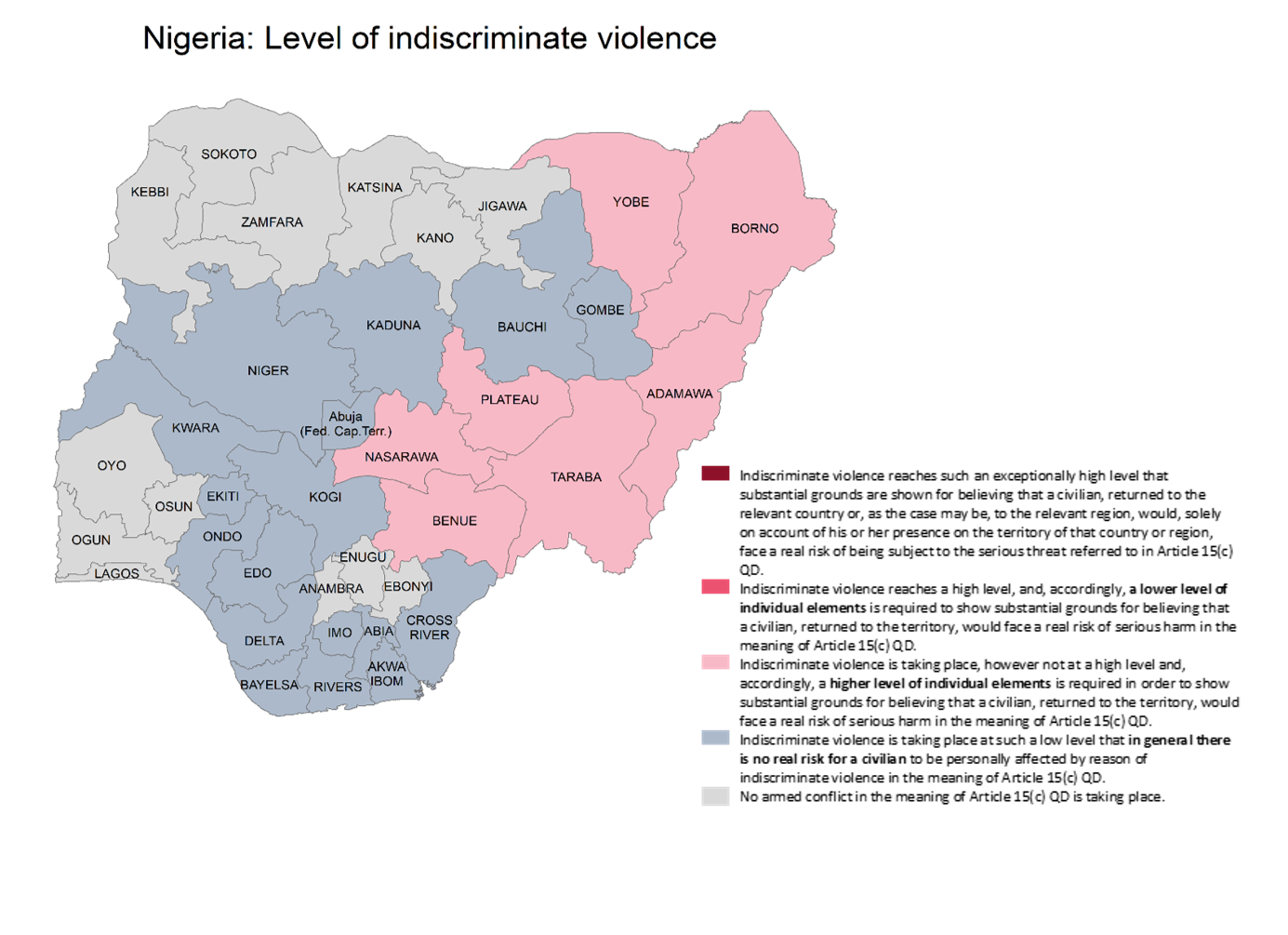 It should be noted that there are no states in Nigeria where the degree of indiscriminate violence reaches such a high level that substantial grounds are shown for believing that a civilian, returned to the relevant country or, as the case may be, to the relevant region, would, solely on account of his or her presence on the territory of that country or region, face a real risk of being subject to the serious threat referred to in Article 15(c) QD.

For the purposes of the guidance note, the territories of Nigeria are categorised as follows: 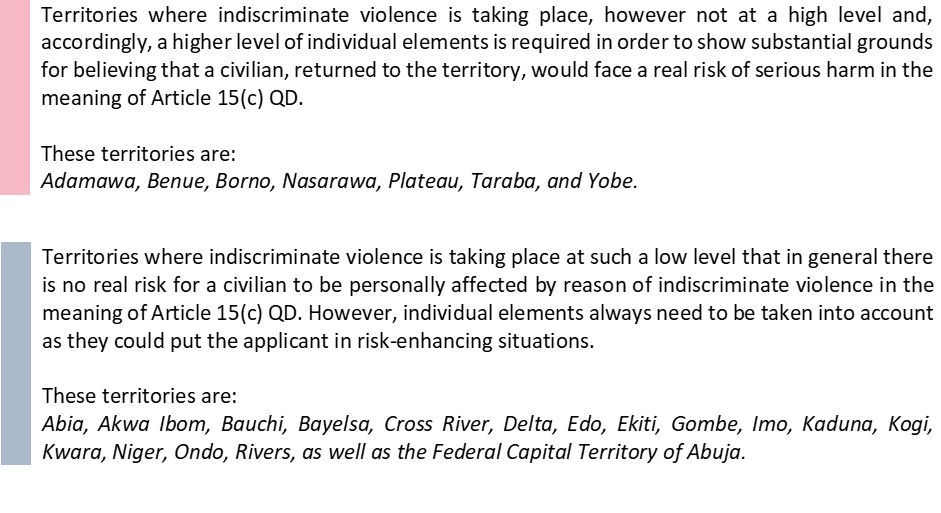 ■Civilians who may be substantially and materially affected by violence because of their geographical proximity to a possible target (e.g. those living in proximity to known Boko Haram targets, such as markets, schools, hospitals, religious buildings, IDP camps, military bases; those living in villages of farmers or herders’ communities in the LGAs particularly affected by the violence between herders and farmers).
■ Civilians who are less able to avoid risks of indiscriminate violence by way of seeking temporary shelter from fighting or attacks (e.g. persons with disabilities or serious illnesses; elderly; children; those in an extremely dire economic situation).