As the centre of expertise on asylum and reception, EASO plays an important role in strengthening CEAS by working with third countries (see Figure 3.1). The ultimate goal is to build a stable, functioning CEAS by, not only improving legislation and procedures within Europe, but also working in collaboration with third countries located along migration routes into the EU. The work on this external dimension aims to:

In view of changing patterns in the field of asylum and the increased support requested by third countries, in February 2019 EASO adopted a revised and improved strategy for external cooperation. The strategy calls for reinforcing cooperation with priority third countries, namely Western Balkan countries (Albania, Bosnia and Herzegovina, Kosovo, North Macedonia, Montenegro and Serbia), Turkey, and the Middle East and North African (MENA) region. EASO’s work in this area includes the provision of support on resettlement schemes and delivery of capacity-building activities in third countries.

All EASO programmes to support third countries are developed and implemented in consultation and close cooperation with EU+ countries, the European Commission, the European External Action Service (EEAS) and the European Union Justice and Home Affairs (JHA) agencies and their networks. When necessary, work is also coordinated with UNHCR, IOM and other key organisations to align efforts and add value to common goals.

EASO supports the implementation of resettlement efforts by EU+ countries in the framework of European resettlement schemes. In Turkey, EASO also works closely with the EU Delegation and EU Member States to assist resettlement operations from Turkey to the EU. In 2019, the agency launched a pilot project for a Resettlement Support Facility in Istanbul, where selection and cultural orientation missions are conducted as part of the resettlement process. In this project, EASO works in close cooperation with the ICMC.

In the area of information exchange and knowledge-building, EASO provides a forum for discussion among EU+ countries on resettlement and complementary pathways. In the context of the EU-FRANK project led by the Swedish Migration Agency, EASO with key partners, such as the MPI, the IOM, the ICMC and various national institutions, helped to develop training modules on resettlement and supported the creation of joint tools for future resettlement operations.

In the area of third country support, EASO has delivered capacity-building activities in Western Balkan countries, Turkey and countries in the MENA region. For the first two, part of the support is provided through the EU-funded, multi-country IPA II project, Regional Protection-Sensitive Migration Management in the Western Balkans and Turkey, which was launched in 2019 to mainstream protection in migration management and align asylum legislation, practices and reception conditions. 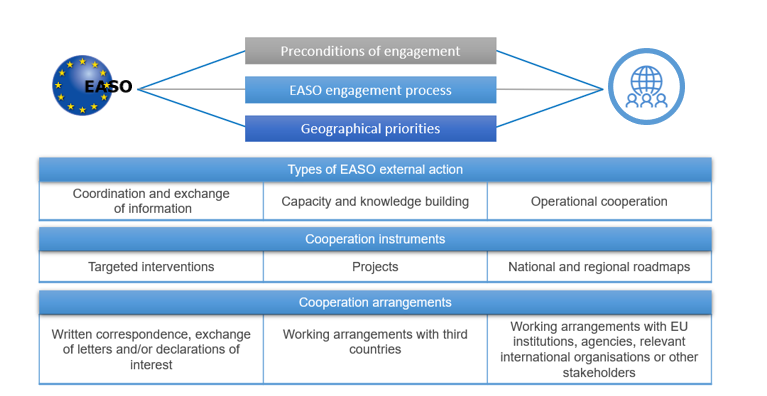 Globally, Turkey hosts the highest number of refugees due to its geographical location, and as a result, its asylum systems are under long-term strain and social tensions are increasing in the country. In an effort to reinforce the Turkish asylum system, throughout 2019 EASO supported the Turkish Directorate General for Migration Management (DGMM) and the Provincial Directorates of Migration Management (PDMM) by sharing knowledge and expertise. The special support is defined in the February 2018-June 2019 expanded roadmap, namely to develop methodology in asylum processes and train staff working with vulnerable groups. Through EASO’s capacity-building activities, the DGMM now has:

As a result of the successful implementation of previous assistance programmes since 2014, EASO and DGMM renewed and expanded a roadmap covering September 2019 to August 2021, with a focus on country of origin information, supporting DGMM decision centres, contingency planning, strengthened internal training programmes, special needs for vulnerable groups and assisting with information analysis and management.

Western Balkan countries which receive additional support from EASO and its partners include Albania, Bosnia and Herzegovina, Kosovo, North Macedonia, Montenegro and Serbia. While benefitting from general capacity-building activities under the second phase of the IPA II project, these countries received tailored interventions in 2019 to address specific needs in the region.

At the country level, the implementation phase of two specific roadmaps covering 2017-2019 for Serbia and North Macedonia were concluded in 2019. The action plan focused on strengthening procedures in national administrations and reception of applicants for international protection. Within the project, EASO published its Identification of Persons with Special Needs (IPSN) tool into Macedonian and Serbian. EASO staff also undertook site visits to Albania and Bosnia and Herzegovina to identify gaps in their systems and to define roadmaps for capacity building.

EASO participates in the EU Migration Dialogues in the context of asylum. During 2019, EASO began implementing bilateral cooperation with Egypt and Morocco to assist in the development of asylum legislation and systems which are aligned with international standards. The aim is to build capacity in these countries to implement sound asylum policies, provide international protection and improve reception conditions. As part of the capacity-building activities, planned site visits by experts from EU+ countries and training visits within Europe have been undertaken or planned for the near future. These exchanges of information promote further cooperation between EU and third countries when managing migration patterns.