An asylum application can be withdrawn for various reasons before a final decision has been issued. For reporting purposes, withdrawn applications can be measured based on two indicators:

Data on implicit withdrawals may cover cases prior to the reference year since an applicant may have absconded long before the withdrawal was noted and reported.

The number of applications that were withdrawn in 2019 rose by 20 % to reach approximately 69 500. Withdrawals occurred largely in Greece and Italy. The data also show that males were much more likely to withdraw their applications, representing almost three-quarters of all withdrawals. This was especially the case for young adult males, aged 18 to 34 years.

Withdrawn applications, especially implicit ones, can serve as a proxy indicator of absconding and the beginning of secondary movements towards other EU+ countries. While Eurostat data do not indicate the type of withdrawal, EASO’s provisional EPS dataxxiii suggest that almost three-quarters of all withdrawn applications in 2019 were implicit. Consistent with this interpretation, most withdrawals took place in frontline Member States, such as Greece and Italy, which together accounted for more than two-fifths of all withdrawals.

Among the countries with the highest number of withdrawals, the largest increases from 2018 to 2019 were seen in: Cyprus, Greece, Italy, Slovenia and Spain. In contrast, withdrawals decreased in some of the so-called destination countries such as Austria, Denmark, Germany and Sweden.

In 2019, approximately 1 in every 10 applications for international protection that was lodged was withdrawn. At the country level, the ratio rose to 1 withdrawal for every 5 applications in Greece and 1 in 3 in Italy.

While representing a much smaller share, withdrawals were proportionately common also in Slovakia and Slovenia (a ratio of about four to five lodged to withdrawn applications), as well as in Bulgaria, Croatia, Latvia and Poland (one withdrawal for about every two applications lodged) and Denmark and Romania (one for every three) (see Figure 4.16).

Figure 4.16 Ratio of withdrawn to lodged applications in EU+ countries, 2019 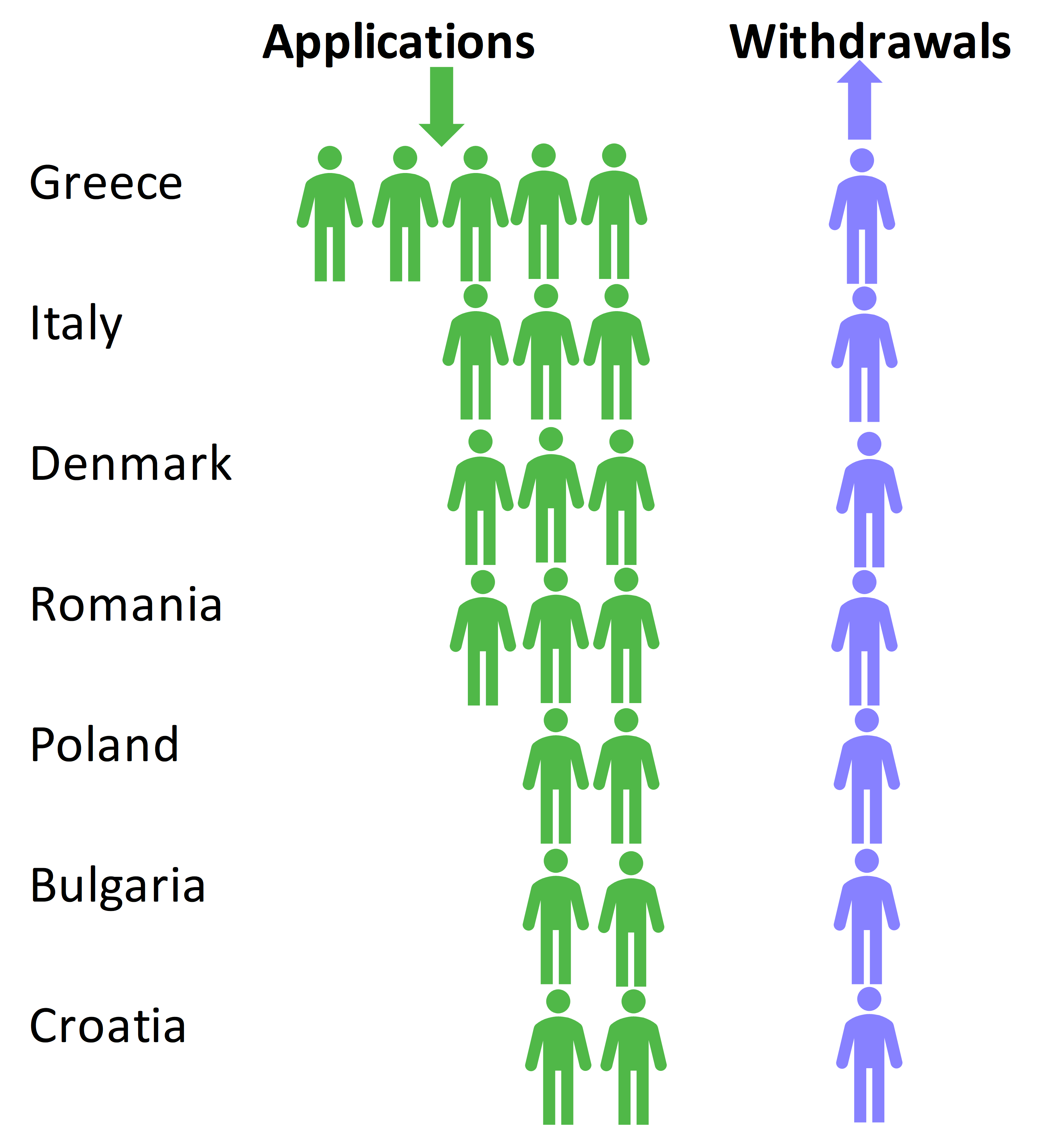 Withdrawals by the nationality of applicants

It has been noted that withdrawn applications can be a sign of secondary movement by the applicants from the country of lodging an application to another EU+ country. It was observed that more nationals of Turkey and Afghanistan withdrew their applications for international protection in 2019 compared to other countries. They also accounted for more withdrawals compared to the previous year. This trend was particularly noted for applications lodged in Greece for both nationalities and in Austria and Bulgaria for Afghans.

Other notable trends involved a rise in applicants from Algeria and Morocco withdrawing applications lodged in Slovenia, and also in Italy for Moroccans. Likewise, more Nigerians withdrew their applications, mainly in Italy (see Figure 4.17). These findings are in line with well-known secondary movements for these citizenships.

Figure 4.17 Number of withdrawn applications in 2019 and changes compared to 2018, by EU+ country and citizenship 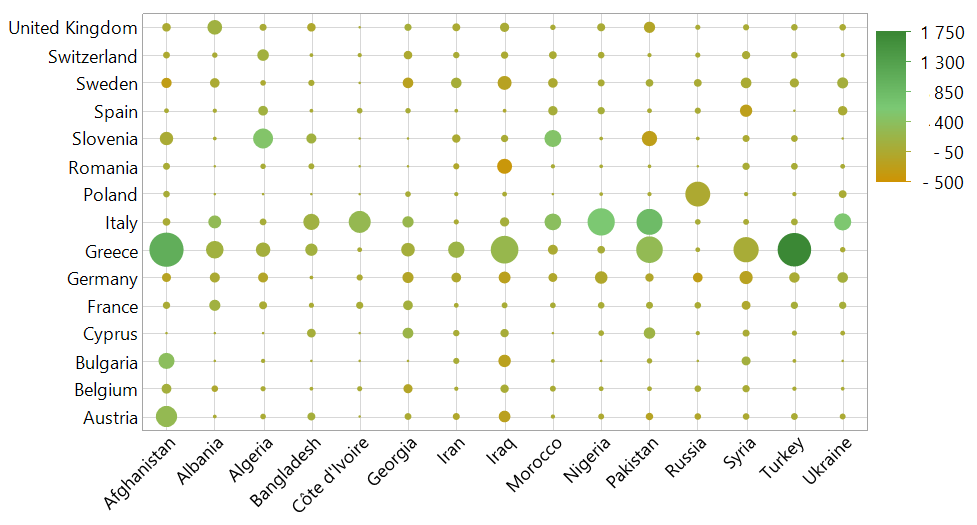 Note: The size of the bubble indicates the number of withdrawals in 2019 and the colour represents changes compared to 2018. Only the Top 15 EU+ countries and citizenships are presented.
Source: Eurostat.

xxiii In the framework of the EASO’s EPS data exchange, the indicator on withdrawn applications is disaggregated by type of withdrawal (explicit or implicit). Direct comparison of EASO and Eurostat data is not possible. The EASO indicator refers to applications withdrawn during the first instance determination process related to first instance decision-making, while Eurostat data cover applications withdrawn at all instances of the administrative and/or judicial procedure. In addition, the reporting dates differ: EASO uses the date of the decision on the withdrawn application, while Eurostat uses the date the application is considered withdrawn. Furthermore, the EPS data collection does not cover Iceland or Liechtenstein.