In 2019, efforts were channelled to establishing the Union Resettlement Framework as one of the top priorities (see Section 2.5). Under the European Commission’s recommendations in 2017, it was envisaged to resettle 50 000 migrants696 and Member States made progress towards this goal throughout the year.

The Norwegian authorities took over 3 000 favourable decisions on the resettlement of refugees from a variety of nationalities in 2019. More than 2 800 quota refugees arrived in Norway during the year. Moreover, Norway offered 93 additional places to refugees in vulnerable situations after being evacuated from Libya. National programmes were also operating in Sweden, resettling around 5 000 refugees from various countries of origin during 2019.

Building on the work already done since 2015, a new phase of the Irish Refugee Protection Programme (IRPP) was announced by the Department of Justice and Equality in December 2019.698 This phase would provide a legal and safe passage to 2 900 refugees between 2020 and 2023, focusing on Syrians, particularly children, residing in Jordan and Lebanon. A pilot project in 2020 will resettle Eritrean refugees residing in Ethiopia.

Similarly, the Croatian government adopted a new decision in February 2019 on the resettlement of third country nationals and stateless persons who fulfil the conditions for international protection (HR LEG 02). Under the EU resettlement scheme, Croatia committed to settle up to 100 refugees over 2020-2021. By September 2019, Croatia had resettled 250 refugees, of which 98 Syrians had arrived in the country during 2019. Croatia pledged to accommodate another 100 refugees in 2020-2021.

While some countries adopted new decisions to increase the number of pledges, other countries needed to reduce or close their programmes. Due to the high number of disembarkations from North Africa in 2019, Malta cancelled the transfer of refugees who had already been selected and interviewed.

In Estonia, after resettling 7 of the 40 Syrians under its national commitment, the national resettlement programme was discontinued.

In cooperation with various stakeholders involved in resettlement, countries organise selection missions and study visits to third countries. For instance, at the beginning of 2019, the Croatian Ministry of the Interior carried out a selection mission in Turkey with the aim to resettle 100 refugees.

In June 2019, four government representatives took part in a visit to exchange best practices and experiences with Portugal, while Portugal undertook a selection mission in Turkey. Luxembourg also organised a selection mission to Niger in October 2019, through which 48 refugees were selected for resettlement in Luxembourg. By the end of the year, 35 had been transferred to the country, with the remainder postponed due to medical constraints but envisaged for 2020.699

In the broader context of global efforts to expand resettlement opportunities, some countries cooperate with private organisations, such as individuals, companies, NGOs or faith-based groups, to maximise available resettlement programmes. The involvement of these organisations in resettlement activities is focused on the arrival and integration of refugees. In addition, they could also take part in the identification and selection of refugees, such as in the Humanitarian Corridors programmes (see Section 7.14.4).

Pilot sponsorship projects were implemented in several countries during 2019. For example, the regional government of Pais Vasco in Spain, in coordination with the Secretary of State for Migration, implemented a community sponsorship programme in March 2019. Individuals, voluntary organisations and faith-based groups manage the programme, through which 29 refugees from Jordan have been resettled in the region.700 Refugees from Jordan are also resettled through a German sponsorship programme, NesT (Neustart im Team), which started operating in May 2019. The programme provides up to 500 places for selected refugees, and a total of 17 were resettled in 2019.

At the end of 2019, the Department of Justice and Equality of Ireland launched a Community Sponsorship programme701 in cooperation with various organisations (such as Immigration, Refugees and Citizenship Canada, UNHCR, Irish Red Cross, NASC and Amnesty International) for interested citizens and community organisations to participate in supporting refugee families upon their arrival to Ireland, in particular with access to housing and state services. Since its launch, 12 Community Sponsorship Groups have been formed and 30 refugees from eight families have been assisted. In recognition of this initiative, Ireland received an award from the Global Refugee Sponsorship Initiative (GRSI)lxvi in October 2019.702

In addition, a new process for emergency resettlement will also be developed, allowing the United Kingdom to provide fast routes of protection during instances of heightened protection needs. The Community Sponsorship Scheme, which enables community groups to directly welcome and support refugees in the United Kingdom, will continue working; however, after the new scheme launches in 2020, refugees resettled by community sponsors will remain separate and in addition to the quota of the global resettlement scheme. The same will happen with the refugees resettled under the national Mandate Resettlement Scheme, which can be used for recognised refugees with close family members living in the United Kingdom.

Humanitarian admission programmes are diverse, ranging from expedited temporary protection for a large number of vulnerable refugee groups to granting protection upon arrival similar to resettlement schemes but following a different procedure. The initial assessment in the country of first asylum does not include a full refugee status determination, and the beneficiaries of the programmes must apply for international protection once they arrive in the European Union.

During 2019, Member States continued to enhance their humanitarian admission programmes in cooperation with third parties. For example, the Humanitarian Corridors programme continued operating in France. The programme was established in March 2017 through a Memorandum of Understanding by the French Ministry of Interior, the Ministry of Foreign Affairs and five organisations (the Community of Sant’ Egidio, the Protestant Federation of France, the Protestant Federation of Mutual Aid (FEP), the Episcopal Conference of France (CEF) and Secours Catholique – Caritas France).705  In 2019, 519 Syrians and Iraqis from Lebanon were identified and selected as beneficiaries of the project. By the end of the year, 420 of them were already settled in France where they were granted refugee status or subsidiary protection.

The humanitarian corridors has also operated in Italy since November 2017 through the Protocol Ethiopia-Italy and the Protocol Lebanon-Italy.lxvii Through both mechanisms, Italy granted legal and safe entry to around 700 people in 2019. As recognition of the success of this programme, the Italian Humanitarian Corridors programme received the UNHCR’s Nansen Refugee Award in September 2019.706

Under a presidential commitment made to Nadia Murad, an Iraqi activist and Nobel Peace Prize recipient, France received 103 families from Iraq (466 members) from the ethno-religious minority group, Yazidis, mainly consisting of women and their children.707 In addition, France has granted ‘visas for asylum’ to Syrians since 2013 and Iraqis since 2014. In total, over the years, 6 612 Syrians and 7 588 Iraqis have arrived in France with a long-term visa for asylum.

Several countries received more refugees under resettlement schemes in 2019 than in 2018. For example, while receiving smaller shares overall, Portugal had a 971 % increase from 2018, resettling a total of 375 refugees. Likewise, Ireland had a 131 % increase, resettling 785 refugees. 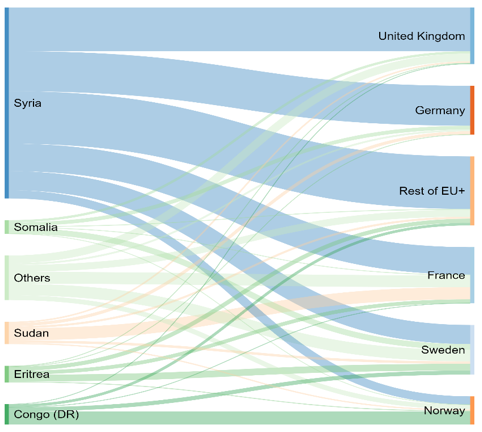 Note: Data are not available on the country from which a refugee was resettled.
Source: Eurostat.

As seen in the past three years, Syrian refugees accounted for nearly two-thirds of all resettled persons in 2019, with over 19 000 being resettled.

The overall number of persons resettled in Europe has been slowly increasing since 2017, but each year Syrians have been representing a smaller share of the total. This means that a wider range of citizenships are being resettled. For instance, in 2019 Norway resettled many nationals from Syria and also from the Democratic Republic of the Congo.

Overall, the sex ratio of resettled persons was more or less equal (48 % were female),lxx  but almost two in five were younger than 14 years old.lxxi

Minors accounted for more than one-half of the resettled refugees from the Democratic Republic of the Congo, Ethiopia, Iraq, Somalia, South Sudan and Syria. Most of them were younger than 14 years old.

While a large number of refugees have been successfully resettled in Europe or admitted through humanitarian admission programmes, challenges in effective implementation continue to surface. Over 2019, a number of issues were identified in countries.

Authorities in Belgium encountered difficulties with transfers and reception of resettled refugees due to the impact of the place reduction in 2018, combined with a high increase in regular applications for international protection and the length of the asylum procedure in 2019. Although the federal reception agency considerably increased reception places (see Section 7.7), the organisation of selection missions was affected and there was a decrease in the transfer and reception of resettled refugees. Despite these challenges, Belgium has resettled 1 119 out of the 2 000 refugees pledged for the period 2018-2019).

Insufficient provision of information to refugees

Some refugees who were selected have withdrawn from resettlement or humanitarian admission programmes, as was the case in Spain709 and Croatia in 2019, due to for example personal reasons. In order to improve its results in resettlement in Croatia, cultural orientation programmes were organised by the ICMC, the Ministry and the JRS to provide information on rights, obligations and cultural values.

Threats to the safety and security of officials conducting selection visits can hinder the resettlement process. In 2019, this was the case during the Finnish selection mission to Niger. Norway also cancelled a mission to Niger and evacuated refugees directly from Libya instead.

AMIF funding for resettlement has been allocated through three channels: i) national programmes; ii) lump sum per resettled refugee; and iii) union actions managed by the European Commission. The support is provided to increase capacity in Member States to rapidly expand their activities and human resources on resettlement.

EU funding for resettlement provides an incentive to Member States to establish and implement national resettlement programmes in response to the global refugee needs. However, additional guidance on how to implement AMIF lump sum financing or support to some actors in adapting to the benefits of it (reduction of administrative burden and increase of flexibility) are needed.710

lxv Definition provided in the EMN Glossary: https://ec.europa.eu/home-affairs/e-library/glossary/resettlement-programme_en
lxvi GRSI is a joint initiative led by the Government of Canada, UNHCR, the Open Society Foundations, the Giustra Foundation and the University of Ottawa that works to assist and inspire countries around the world to open new pathways for refugee protection by sharing experiences and creating new initiatives.
lxvii The programme was established for the first time in December 2015 with the signature of the first protocol for 1 000 Syrian refugees from Lebanon between the Italian Ministry of Foreign Affairs and International Cooperation, the Italian Ministry of Interior, the Community of Sant’Egidio, the Federation of Evangelical Churches and the Waldensian Table. In November 2017, a new protocol was signed by the same actors for a period of two years (2018-2019) and with the aim to resettle 1 000 refugees more. The same year, the Italian government made an agreement with the Italian Episcopal Conference and the Community of Sant Egidio to launch a new initiative opened to 500 African refugees, mainly Eritreans, Somalis and South Sudanese, in Ethiopia. This agreement was renewed in May 2019 foreseeing the support in the arrival of 600 more refugees from Africa. For more details: Working Group of the Humanitarian Corridors Project. (2019). Humanitarian Corridors: Implementation procedures for their extension on a European scale. https://www.humanitariancorridor.org/wp-content/uploads/2019/12/REPORT_ENG_WEB.pdf.
lxviii Data were available for 29 EU+ countries, out of which 11 did not receive any resettled persons.
lxix The number of resettled persons in 2019 is lower than the number in 2018 because Croatia pledged a total of 200 persons for the period 2018-2019. Since the number of resettled persons in 2018 was higher than planned (112 persons rather than 100), the number of resettled persons in 2019 was slightly lower (98 persons rather than 100); hence, the decrease does not represent a trend.
lxx This proportion does not include the resettled persons for whom EU+ countries were unable to report the gender, accounting for 0.7 % of the cases.
lxxi For just 0.7 % of resettled persons, the age group could not be reported.