At the EU level

A first instance asylum application is considered to be closed once a decision has been issued by national authorities. According to Regulation (EC) 862/2007,176 there are five decision outcomes that should be reported by EU+ countries:

With regard to the characteristics of applicants, 64 % of all first instance decisions concerned males and 36 % females, which mirrors the ratios for the number of applications lodged.

Five countries accounted for three-quarters of all decisions taken on international protection in Europe in 2019: France, Germany, Greece, Italy and Spain. Spain issued almost five times as many first instance decisions in 2019 compared to 2018, and by the end of the year, decision-making in Spain exceeded that of Germany (which has generally issued the highest number of decisions). While the number of decisions in Europe has been declining, the high number rendered in Spain accounted for the 2019 total to be comparable to that of 2018. Most decisions issued by Spanish authorities granted automatic national protection for some Latin American citizenships, which entails a faster procedure in terms of case processing.

Excluding Spain from the overall totals, the number of decisions issued in the remaining EU+ countries dropped by 11 % compared to 2018. The decrease was most noteworthy in Germany, the country which generally issues the most decisions. With continuously declining numbers since the peak of 2016, Germany issued around 25 000 fewer decisions in 2019 than in 2018.

A similar absolute decline occurred in Austria, with approximately 21 000 fewer decisions in 2019. However, when looking at the decline in relation to the total number of decisions issued, Austria had the sharpest decline among EU+ countries in relative terms. Fewer decisions were issued also by Sweden and Switzerland.

Trends remained stable for France, Greece and Italy. In contrast, Cyprus and the Netherlands issued more decisions than in the previous year (see Figure 4.11).

Figure 4.11 Relative year-to-year changes in first instance decisions by issuing EU+ country and decisions by nationality of applicants in Spain, 2019

Note: The graph presents countries which issued more than 2 000 decisions in 2019.
Source: Eurostat.

In addition to applicants from Venezuela, other Latin American nationals received more decisions in 2019 than in previous years. There were more than three times as many decisions issued in 2019 compared to 2018 to nationals of Colombia and El Salvador, largely in Spain.

Noticeably more decisions were also issued to Palestinians, especially in Greece and Spain, to Tunisians and Moroccans, particularly in Spain and for the latter also in Italy, and to Yemenis, mostly in the Netherlands and Spain. In fact, Spain issued more decisions to most nationalities (see Figure 4.4).

In relative terms, a rise in decisions was noted for Moldovan applicants in France and the Netherlands, and Turkish applicants in Norway and Finland. Conversely, the share of decisions issued to Gambians, Ethiopians and Armenians declined.

In general, recognition rates and the types of protection granted in positive decisions varied considerably across citizenships. While the situation likely reflects differences in caseloads in terms of the nationalities of applicants and their protection needs, it may also signal a lack of harmonisation across EU+ countries in the implementation of CEAS.

In 2019, among EU+ countries issuing the most decisions, recognition rates ranged from 10 % in Czechia to 88 % in Switzerland.xix Such variation has been persistent throughout the years. For many citizenships, the outcome depended strongly on where the application was lodged. For example, recognition rates for Afghan nationals ranged from 32 % in Belgium xx to 97 % in Switzerland. Almost all applicants (more than 90 %) from Turkey were granted international protection in the Netherlands, Norway and Switzerland, compared to just 51 % of Turks lodging an application in Germany and 26 % in France.

However, such variations did not exist for all citizenships. For instance, applicants from Albania and Syrian received similar recognition rates across all EU+ countries.

In terms of changes over time, in Italy – which issues more decisions to applicants from Nigeria than any other country – the number of positive decisions issued to Nigerian applicants decreased, from a 24 % recognition rate in 2018 to 18 % in 2019. In contrast, the United Kingdom granted refugee status to more Nigerians, with the recognition rate rising from 24 % in 2018 to 36 % in 2019.

Recognition rates by the nationality of applicants

A noticeable development in 2019 was the number of positive decisions granted to applicants from Venezuela. The recognition rate for Venezuelans was 96 % in 2019, compared to just 29 % in 2018. Other nationalities to receive a high share of positive decisions included: Syrians (86 %), Eritreans (85 %) and Yemenis (82 %).

In contrast, applicants from North Macedonia and Moldova received the lowest proportion of positive decisions, at 1 % each (see Figure 4.12). In fact, some Western Balkan and Eastern Partnership visa-exempt countries were among the countries which are steadily having lower recognition rates, for example, only 5 to 7 of every 100 applicants from Serbia, Montenegro and Albania were granted international protection in EU+ countries in 2019.

Figure 4.12 Lowest and highest recognition rates on first instance decisions for the main citizenships of applicants in 2019 and changes compared to 2018 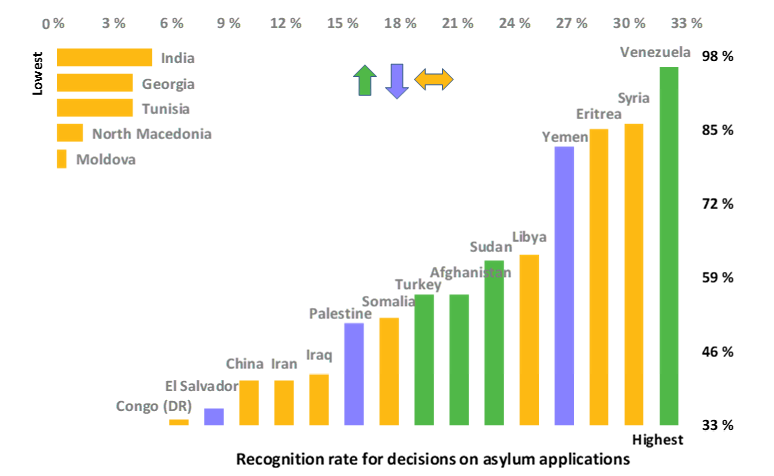 When looking at the rise in applications lodged by Latin American nationals, different trends emerged in the share of positive decisions by country. While the recognition rate for Venezuelans increased in 2019, the opposite trend was apparent for applicants from El Salvador (36 %) and Colombia (7 %). This represented a decline of 31 and 9 percentage points, respectively, compared to 2018. A considerable drop was also noted for Palestinians, with 51 % receiving positive decisions, representing a decrease of 27 percentage points over 2018. In contrast, the recognition rates continued to rise for nationals from Turkey (56 %, +8 percentage points) and Sudan (62 %, +7 percentage points).

Different trends in types of protection granted also emerged in 2019. Applicants from many countries were granted refugee status far more often than subsidiary protection – this was especially the case for applicants from China, Egypt, Eritrea, Iran, Nigeria, Sudan and Turkey. However, most positive decisions issued to Venezuelans granted humanitarian protection, representing 94 % of all positive decisions.

4.5.3. Decisions on second or higher applications

The recast Asylum Procedures Directive, Article 46 ensures the right to an effective remedy but it does not prescribe harmonised standards in terms of the organisation of the appeal or the procedure to be followed. In some Member States, the appeal instance examines and decides on the case de novo in fact and in law, while in others, the appeal is only decided on the legality of the decision taken in the first instance. In other words, in some Member States, the relevant second instance bodies take decisions on the merits of each application, while in others responsible authority is ordered to review its first instance decision.

Data are not disaggregated by the type of decision appealed, thus it is not possible to imply in how many cases a positive final decision reversed a negative decision. As a result, analyses of decisions of higher instances are extremely challenging and results should be interpreted with caution.

At the EU level

Progressively more decisions have been issued at higher instances each year since 2014, but in 2019 decision-making slowed down. In 2019, EU+ countries issued about 313 000 decisions on second or higher instance applications, similar to 2018 (see Figure 4.13). In the absence of data on appeals or on the capacity available to appeal bodies, it is not possible to provide any explanations behind this trend.

The opposite took place in France, where output rose sharply with 66 500 decisions issued, presenting a 43 % increase compared to 2018. In France, the number of asylum applications has been increasing over the past four years, so it is reasonable to assume that many cases entered the appeal stage, accounting for a higher workload for appeal bodies.

In EU+ countries, the most decisions were still issued for appeals lodged by citizens of Afghanistan (41 885 or 13 % of the total), Iraq (22 280 or 7 %) and Syria (22 125 or 7 %). Altogether these three citizenships received more than one-quarter of all final decisions in 2019, but a lower proportion than in 2018 (when they accounted for one-third of all decisions). In fact, Afghans received 14 % fewer decisions in 2019 than in 2018 and Syrians 38 % fewer. Since, the overall output was stable with 2018, it is evident that decision-making increased for other citizenships.

Germany issued decisions on applications for international protection to many citizenships, including Afghans, Iraqis and Syrians (see Figure 4.14). Appeal bodies in France issued the majority of decisions to applicants from Côte d'Ivoire, followed by nationals of Albania, Georgia and Guinea. For Gambians, most decisions were issued in Italy, which also issued a large part of the output to applicants from Bangladesh, Nigeria and Pakistan.

Figure 4.14 Countries of origin of applicants who received the most final decisions, by issuing EU+ country, 2019 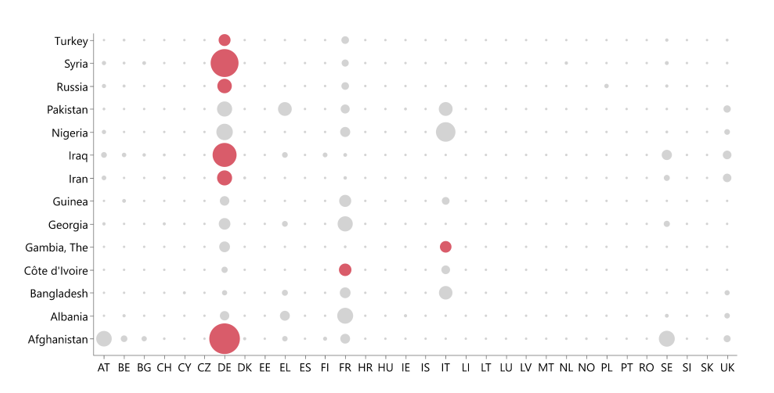 Notes: The size of the bubble indicates the number of decisions; red bubbles are those that represent one-half (or more) of all decisions issued to that citizenship.
Source: Eurostat.

Figure 4.15 Variation in final versus first instance recognition rates for decisions on applications for international protection, 2019 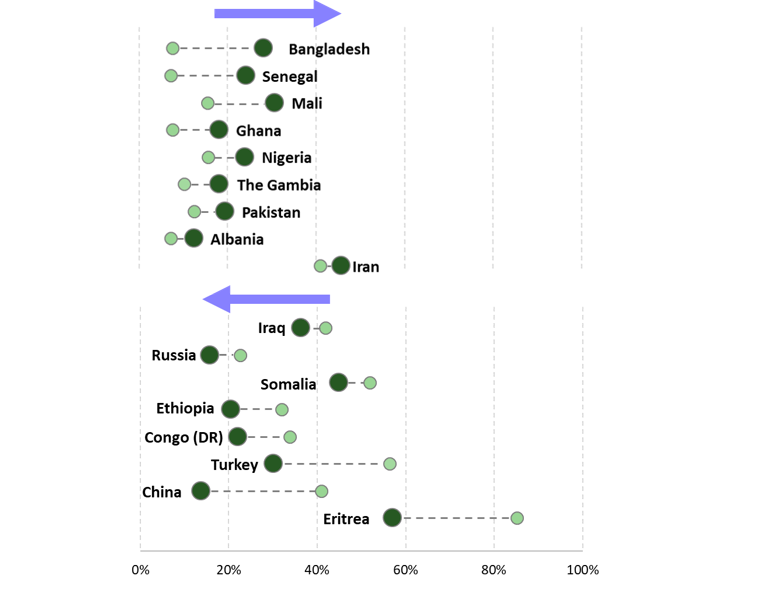 xvii Granting humanitarian protection is not harmonised at the EU level and is only reported to Eurostat in the framework of asylum statistics by 24 of the 32 EU+ countries (Austria, Cyprus, Croatia, Czechia, Denmark, Estonia, Finland, Germany, Greece, Hungary, Iceland, Italy, Liechtenstein, Lithuania, Malta, the Netherlands, Norway, Poland, Romania, Slovakia, Spain, Sweden, Switzerland and the United Kingdom). In addition, various forms of humanitarian protection can be granted, separate from the asylum procedure, and thus the positive decisions may not be reported to Eurostat under this indicator. More information on country-level practices are available at: EMN, Ad hoc Query on Humanitarian Protection.
xviii Based on the Temporary Protection Directive, Regulation 2001/55/EC, this mechanism has not yet been used in EU countries, and therefore, it is not further analysed in this report.
xix Only countries issuing at least 1 000 decisions in 2019 are considered.
xx In Belgium, this was due to a considerable share of subsequent applications by Afghans.
xxi This drop was mainly due to a high number of decisions on applications by Syrians who already had a protection status in another EU+ country.
xxii The inclusive recognition rates include decisions granting national forms of protection as positive decisions.

176 Regulation (EC) No 862/2007 of the European Parliament and of the Council of 11 July 2007 on Community statistics on migration and international protection and repealing Council Regulation (EEC) No 311/76 on the compilation of statistics on foreign workers (Text with EEA relevance). http://data.europa.eu/eli/reg/2007/862/oj