At the EU+ level

Approximately 485,000 applications for international protection were lodged in EU+ countries in 2020, a sharp 32% drop compared to the number of applications in 2019. The decline, which resulted in the lowest number of yearly applications since 2013, can be attributed to COVID-19 restrictions which were implemented in EU+ and third countries, limiting movements across borders and within countries.

As confinement measures were gradually lifted across countries, the pace of applications resumed in June 2020, and from July onwards, remained quite stable for the rest of the year – between 40,000 and 45,000 applications per month. Nonetheless, these figures were unquestionably below pre-COVID-19 levels.

Note: The Oxford Government Response Tracker estimates the stringency of government measures using different scales. For the figure, three indicators measuring movement restrictions were given equal weight and transformed into an index on a scale between 0 and 1.
Source: Eurostat [migr_asyappctzm].as of 28 April 2021 and University of Oxford [COVID-19 Government Response Tracker] as of
21 January 2021.

The stringency of measures and the number of asylum applications are strongly correlated, with a coefficient of -0.96. However, when more rigid restrictions were introduced again in September 2020 in response to the second wave of COVID-19 cases, it seemed to have relatively little effect on the number of asylum applications. This could be explained by the fact that, in contrast to the initial outbreak when numerous asylum authorities drastically reduced their activities and access to their premises, by the fall most EU+ countries had adapted to the new situation and were able to maintain a certain level of services in asylum systems with the help of various protective measures.321 Countries located along the Balkan routes bucked the trend and received more applications in 2020 than in the previous year. The increase in Romania (+3,565, +138%) was the largest amongst EU+ countries in both absolute and relative terms. This was followed by Bulgaria (+1,375, +64%) and Austria (+1,320, +10%) in absolute terms. Croatia and Slovakia also received more applications compared to 2019, particularly in the second half of the year.

The impact of COVID-19-related measures on asylum applications was unevenly distributed across EU+ countries (see Figure 4.1). In countries where the asylum procedure was mostly suspended during the first wave of the pandemic, there was a notable drop in the number of asylum applications, for example by 99% in Spain and 97% in France between March and April 2020. Germany, which kept its asylum procedure open, had just a 29% decline in the number of applications received during this period. As a result, Germany received two-thirds of all applications lodged in the EU+ in April, and almost two-fifths in May 2020.

Nationals of Syria lodged the highest number of applications for international protection in 2020 (70,000), which nonetheless was a 12% decrease from 2019. This nationality accounted for one in seven applications lodged inEU+ countries. With 50,000 applications, citizens of Afghanistan were the second top citizenship seeking international protection in Europe, followed by Venezuelans (31,000), Colombians (30,000) and Iraqis (20,000). Together, the five top nationalities accounted for over two-fifths of all applications in EU+ countries.

The top countries of origin were unchanged from 2019, although nearly all lodged fewer applications in 2020: nationals of Venezuela and Iraq lodged far fewer applications, while the decline was less striking for Afghans and Colombians (see Figure 4.3). Many applications were also lodged by citizens of Pakistan, Turkey, Nigeria, Somalia and Bangladesh (in descending order), but substantially fewer than in the previous year.

There is a pattern of some citizenships lodging applications mainly in a specific EU+ country. For example, Colombians and Venezuelans, as well as most other Latin Americans, lodged the vast majority of their applications in Spain. Similarly, more than one-half of all Syrians and Iraqis applied in Germany. Nationals from some francophone African countries mainly applied in France, and Iranians in Germany.

Many of the main nationalities applying for international protection were also among the top nationalities who were detected illegally crossing the EU’s external borders. In 2020, there were about four times fewer detections of illegal border-crossings (IBC)322 than asylum applications. This decreases substantially to two and a half times when repeated applications and those by nationals from visa-exempt countries of origin are excluded. The implications of this are twofold. Given that there were fewer opportunities to legally enter the EU in 2020, the difference in the number of applications and illegal border crossings could mean that some illegal arrivals were not detected and that there were secondary movements within the EU. The number of asylum applications and illegal border crossings followed a similar trend from the beginning of the year until September 2020 (see Figure 4.4), with a relatively high correlation between the number of first-time visa-obliged applicants and detected IBCs (0.73) in the first three quarters of the year.

Figure 4.3: Number of asylum applications by Top 10 countries of origin in 2020 compared to 2019, with share of applications in the top receiving country, 2020

However, the increase in IBC detections in the last quarter of the year was not reflected in the number of applications. The rise in detections can be attributed to the large increase in the number of arrivals on the Canary Islands, which became the route with the highest number of detections in the last quarter of the year. A record number of arrivals were detected on this route in 2020, about 23,000, which is eight times higher than in 2019. Discrepancies were especially large for nationals from the Maghreb. For example, Moroccans, Tunisians and Algerians(in descending order), who were among the most frequently detected nationals in 2020, lodged fewer applications than in 2019, despite a strong increase in detections of IBC compared to the previous year. 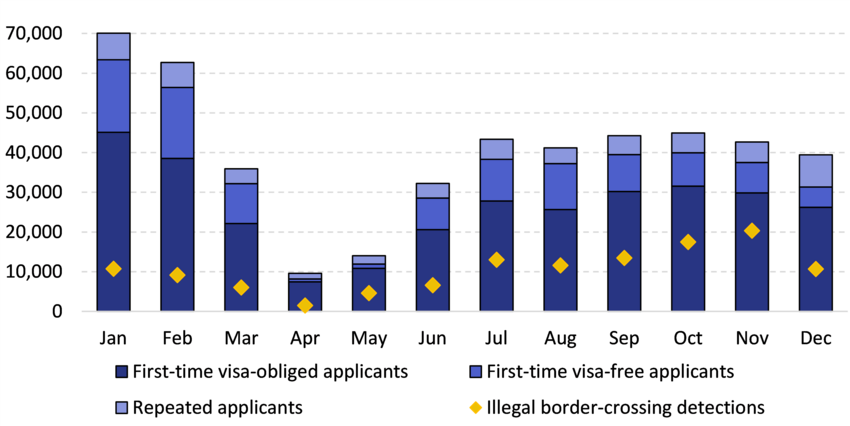 Source: Eurostat [migr_asyappctzm] as of 28 April 2021 and Frontex [Detections of illegal border-crossings] as of 5 February 2021.