The following is a summary of the relevant conclusions concerning the situation in Somalia:

Several conflicts/rivalries take place in the territory of Somalia:

b. Civilian: Article 15(c) QD applies to a person who is not a member of any of the parties to the conflict and is not taking part in the hostilities, potentially including former combatants who have genuinely and permanently renounced armed activity. The applications by persons under the following profiles should be examined carefully. Based on an individual assessment, such applicants may be found not to qualify as civilians under Article 15(c) QD. For example:

It should be noted that actively taking part in hostilities is not limited to openly carrying arms but could also include substantial logistical and/or administrative support to combatants.

It should be noted that there are no regions in Somalia where the degree of indiscriminate violence reaches such a high level that substantial grounds are shown for believing that a civilian, returned to the relevant country or, as the case may be, to the relevant region, would, solely on account of their presence on the territory of that country or region, face a real risk of being subject to the serious threat referred to in Article 15(c) QD.

For the purposes of the guidance note, the regions of Somalia are categorised as follows:

Figure 4. Level of indiscriminate violence in Somalia (based on information up to 30 June 2021). 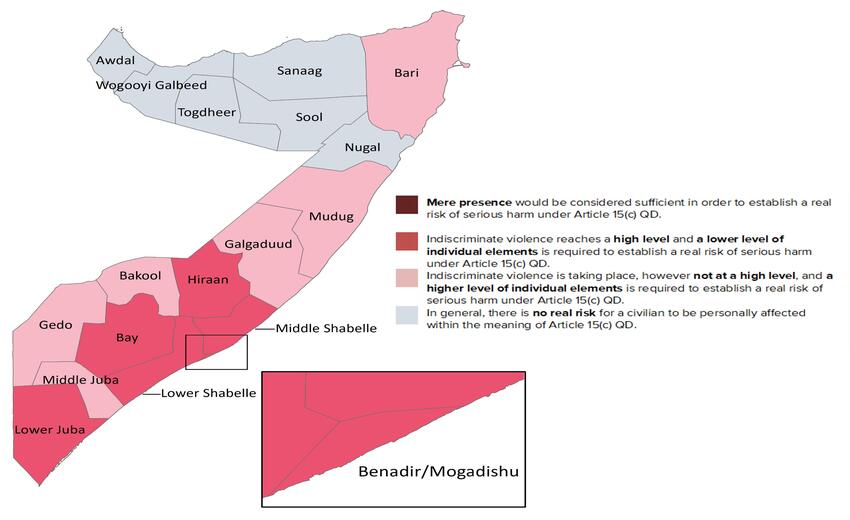 d. Serious and individual threat: in the context of the ‘sliding scale’, each case should be assessed individually, taking into account the nature and intensity of the violence in the area, along with the combination of personal circumstances present in the applicant’s case. Certain personal circumstances could contribute to an enhanced risk of indiscriminate violence, including its direct and indirect consequences. While it is not feasible to provide exhaustive guidance what the relevant personal circumstances could be and how those should be assessed, the following are highlighted as possible examples of circumstances which may impact the ability of a person to assess and/or avoid risks related to indiscriminate violence in a situation of an armed conflict:

e. Threat to life or person: the risk of harm as per Article 15(c) QD is formulated as a ‘threat to a civilian’s life or person’ rather than as a (threat of) a specific act of violence. Some of the commonly reported types of harm to civilians’ life or person in Somalia include killings, injuries, abductions, forced displacement, famine caused by food insecurity, etc.

f. Nexus: the nexus ‘by reason of’ refers to the causal link between the indiscriminate violence and the harm (serious threat to a civilian´s life or person) and includes: