The situation in Middle Shabelle should be seen in light of the situation in the neighbouring regions of Benadir/Mogadishu, Lower Shabelle, and Hiraan. 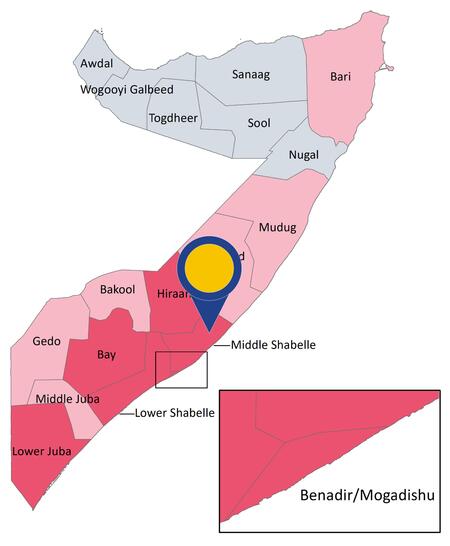 Middle Shabelle region is located in the south-east of Somalia and consists of four districts. The region’s capital is Jowhar.

Middle Shabelle is mainly inhabited by Hawiye sub-clans, the dominant clan being the Abgaal. Other clans/groups present in the area are the Gaaljeel, the Bantu Shiidle, and other minority clans.

In 2014, UNFPA and Somali authorities estimated the population of Middle Shabelle region at 516 036 inhabitants.

Besides the clans and Al-Shabaab, another important actor in the region is the SNA. Like in many other regions in Somalia, Al-Shabaab controls the rural areas whereas the major towns are controlled by state and federal forces, with the help of AMISOM. Al-Shabaab, was involved in 69% of the incidents in Middle Shabelle between 1 January 2020 and 30 June 2021.

The other major source of conflict in the region was the presence and the activities carried out by Al-Shabaab.

The majority of the incidents involving Al-Shabaab also involved Somali Armed Forces or Somali Police Force, AMISOM forces and civilians. The main type of Al-Shabaab-related incidents were armed clashes along with the use of remote-controlled explosives and attacks against civilians. The group mostly carried out hit-and-run attacks targeting Somali Security Forces and AMISOM.

Other illustrative security incidents include the clashes between SNA forces and Al-Shabaab on 29 May 2021 in Xaararay village near Jowhar town killing 37 militants and injuring 40 others.

On 27 May 2020, seven Somali health workers were kidnapped in Middle Shabelle region and killed. The kidnapping of an eighth health worker on the same day was also reported.

On 14 April 2021, a minibus travelling from Mogadishu to Jowhar struck an IED near Balcad town. Up to 17 people were reportedly killed.

Violent incidents against civilians related to clan conflicts over land included the killing of five teachers by Al-Shabaab at a Quranic school in Cadale district in September 2020.

Security incidents occurred in all 4 districts of Middle Shabelle with the largest overall number being recorded in Jowhar district (148 events), followed by Balcad District (108 events) for the period between January 2020 and end of June 2021.

In the reference period, ACLED recorded a total of 575 fatalities in the region. Compared to the figures for the population in the region as from 2014, this represents approximately 111 fatalities per 100 000 inhabitants.

Clan violence affected people’s lives and livelihoods as well as caused displacements in Middle Shabelle. Clan conflicts were also the reason that humanitarian programmes were suspended. Al-Shabaab has also disrupted major supply routes in areas not directly under its control. For instance, FGS and Hirshabelle officials can no longer travel by road between Mogadishu and Jowar, having to fly instead.