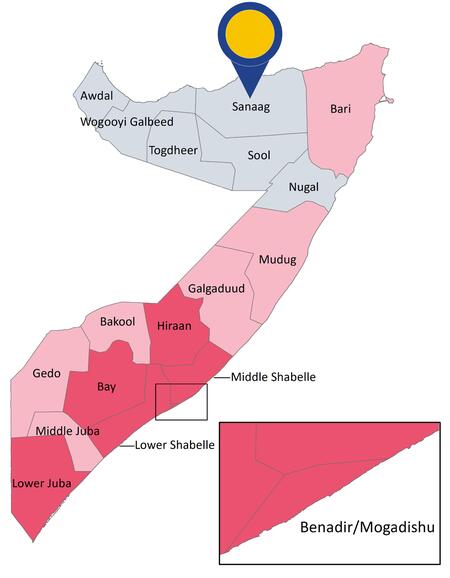 Sanaag region consists of three districts and its capital is Erigabo (also Ceerigabo).

Eastern Sanaag is inhabited primarily by Warsangeli, a Darood sub-clan, which is part of the Harti confederation together with the Majerteen clans of Puntland. There are also Dhulbahante (Harti) present in parts of southern Sanaag. The western part of Sanaag is inhabited by the Isaaq Habar Yunis.

In 2014, UNFPA and Somali authorities estimated the population of Sanaag region at 544 123 inhabitants.

Puntland and Somaliland dispute over political and military control of areas of the Sool and Sanaag regions as well as the area of Ayn, part of Togdheer region. Sool and Sanaag fall within Somaliland’s boundaries, as per the old Anglo-Italian border and protocol and as put forward by the Somaliland government. However, the two dominant clans in the area (Warsangeli and Dhulbahante) belong to the same Darood/Harti clan family for which Puntland constitutes the core and institutional ‘home’.

According to an expert, the majority of Warsangeli is now siding with either FGS or Puntland and, in June 2021, there were no clashes between the two state administrations over the contested areas.

Warsengeli clan elders tend to defuse potential conflict spirals and to resort to conflict management over the disputed areas.

The presence of both Somaliland and Puntland armed forces has been reported. Tensions between Puntland and Somaliland in disputed areas reportedly heightened as a result of elections.

Inter and intra-clan disputes, involving clan militias, over land and water have been frequently reported.

In November 2019, Al-Shabaab made a first attempt at penetrating the Sanaag region. However, within hours, Somaliland managed to repel this attempt. In October and December 2020, Al-Shabaab takeovers of villages in Lasqoray district were reported. Puntland security forces reportedly tried to regain control of the captured areas.

Inter and intra-clan disputes have led to armed clashes, revenge killings, casualties and displacement. For example, in March 2021, a clash between sub-clan militias resulted in 16 casualties. Among others, security incidents related to clan conflicts do not always receive local media attention and hence might go under-reported in Somalia.

Furthermore, clashes between Somaliland and Puntland forces were reported in February 2020 [Security 2021, 2.6.3].

Al-Shabaab has also been involved in battles against Puntland security forces.

Furthermore, one armed clash between the Somaliland police and sub-clan militia has been reported.

Violent acts against staff members of humanitarian aid organisations have also been recorded.

Security incidents occurred in all districts of Sanaag region with the largest overall number being recorded in Erigabo district (14 incidents).

In the reference period, ACLED recorded a total of 28 fatalities in the region. Compared to the figures for the population in the region as from 2014, this represents approximately 5 fatalities per 100 000 inhabitants.

Between January 2020 and May 2021, PRMN reported 22 000 new displacements from Sanaag. Conflict and insecurity led to the displacement of 3 200 cases. In 2020, additional 40 displacements to Sanaag were registered from Bari.

In Sanaag administrative region, conflicts between Somaliland and Puntland forces affected, among others, the distribution of medical supplies. The work of humanitarian aid organisations was burdened by access incidents. For Sanaag region, twelve incidents of humanitarian workers being unable to access sites were reported in 2020 and 2021.

In terms of internal mobility and security, Somalis in general freely move around Puntland without too many security concerns. Exceptions are the contested area in Sool and Sanaag or areas where Al-Shabaab has presence such as around the Galgala Hills.

Harassment against journalists when they reported on government shortcomings or union with Somalia was reported, particularly in the Sool and Sanaag regions.