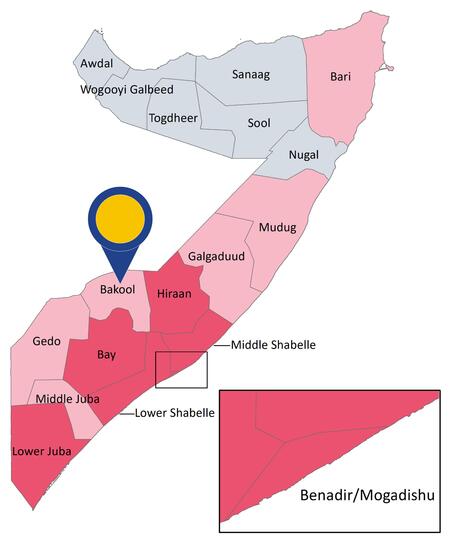 Bakool region is located in the south-west of Somalia and consists of five districts. The region’s capital is Hudur (also Xudur).

In 2014, UNFPA and Somali authorities estimated the population of Bakool region at 367 226 inhabitants.

Al-Shabaab was actively engaged in the Bakool region where it predominantly controls the rural areas and was involved in 80% of the incidents in Bakool between 1 January 2020 and 30 June 2021.

The State and federal state forces are in control of the main towns, including the capital Hudur, which are like islands encircled by al-Shabaab’s or contested territory. Hudur is also an AMISOM ENDF base.

In terms of clan rivalries, Hawiye and Rahanweyn/Mirifle clashed over pasture and wells. Mukhtar Robow’s militia, which was still active in the Hudur district, is predominantly drawn from the Rahanweyn clan and its Laysan sub-clan (Robow’s power base).

The main source of conflict in Bakool is the on-going armed confrontation between Al-Shabaab and anti-Al-Shabaab forces amongst which federal and states forces are politically and militarily aligned. SNA units, acting independently from Mogadishu, and other local armed units, have jointly fought against Al-Shabaab while engaging in a form of counterinsurgency and tactical warfare. This military resistance, which was terminated in the course of 2020, had been sparked by Al-Shabaab’s attempt to control and prevent food supplies to reach the main towns of Bakool, such as the capital Hudur.

The incidents related to Al-Shabaab involved either Somali military or police forces, Ethiopian forces or AMISOM and mostly were coded as battles or armed clashes. Al-Shabaab also carried out (attempted) assassinations and (suicide) attacks.

During the same reporting period, three aerial strikes by the US were recorded, killing three Al-Shabaab members.

South-West region, Bakool included, constitutes one of the three FMS (along with Benadir and Hirshabelle) where IEDs are regularly encountered [Security 2021, 2.2.4].

Illustrative security incidents include, for example, an IED attack in June 2021 on the district commissioner of Hudur town that killed one of his bodyguards and injured several other people. On 5 March 2021, Al-Shabaab carried out a suicide attack near a police station in Waajid town, reportedly injuring four people.

In June 2020, clashes between Al-Shabaab and South-West state forces near Hudur town reportedly left at least 15 members of the regional troops dead, according to a pro-Al-Shabaab media outlet.

There have also been reports of unclaimed attacks on civilians. In late November 2020, unidentified gunmen killed a family of seven in a remote village in Waajid district. Earlier, in September 2020, a landmine explosion in Hudur district reportedly left six religious scholars dead and another two injured.

In June and July 2020, at least three clashes occurred in Hudur, Baidoa and Berdaale when a local clan militia attacked Al-Shabaab fighters, killing dozens of them, in response of Al-Shabaab’s threat of evicting and expelling people in case of refusal by the community leaders and elders to provide children to the group. As a response, Al-Shabaab abducted 60 local community members and held them until a truce was negotiated a few days later. Among others, security incidents related to clan conflicts do not always receive local media attention and hence might go under-reported in Somalia.

Security incidents occurred in all 5 districts of Bakool with the largest overall number being recorded in Hudur (74 incidents).

In the reference period, ACLED recorded a total of 95 fatalities in the region. Compared to the figures for the population in the region as from 2014, this represents approximately 26 fatalities per 100 000 inhabitants.

Between January 2020 and May 2021, PRMN reported an estimated 31 000 new displacements from Bakool. Most people displaced from their homes in Bakool relocated to other places within the same region, with only around 5 000 displaced to neighbouring Gedo, Bay and Hiraan. Conflict and insecurity were one of the main reasons for displacement in Bakool across both years, along with drought.

The insecurity, intimidation and blockades imposed by Al-Shabaab have worsened the humanitarian situation in Bakool, a region that has been affected by food insecurity for a long time. Insecurity has also restricted humanitarian access to populations in need. It has also been reported that Al-Shabaab has de facto imposed a complete embargo on the main towns in Bakool.

In Hudur, a town militarily encircled by Al-Shabaab, most inhabitants could not afford more than one meal per day and only around 5% of the population had sufficient quantities of food to eat, with ‘acute malnutrition’ observed among children.