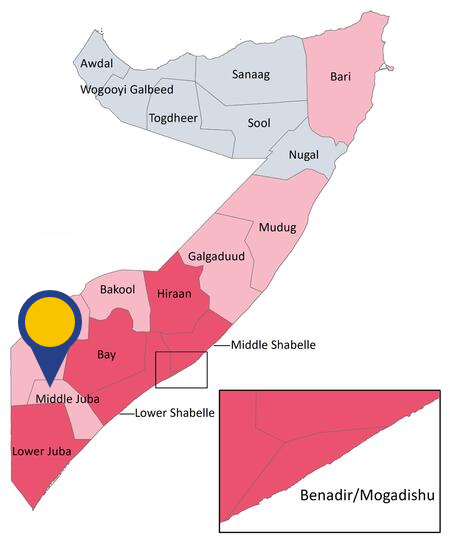 Middle Juba region is located in the southern part of Somalia. It has three districts and it is one of the poorest areas of Somalia. The region’s capital is Bu’aale.

It has a very diverse population in terms of clan representation. The most populous ethnic group in the region is the Somali Bantu. The two politically and militarily strongest clans in Middle Jubba are the Aulihan (Darood) and the Mohamed Zubier/Ogaden (Darood) clans, both residing on the west bank. The east bank of the region is the most ethnically diverse and complex. Other clans and sub-clans in the region include the Digil-Mirifle or Rahanweyn, and several Hawiye sub clans.

In 2014, UNFPA and Somali authorities estimated the population of Middle Juba region at 362 921 inhabitants.

Middle Juba is the sole Somali region that falls entirely and exclusively under Al-Shabaab’s full control. Reportedly, there is no other activity or actors significantly relevant in the region. Inter-clan conflict has been effectively suppressed by Al-Shabaab. Al-Shabaab reportedly congregates the most powerful Al-Shabaab men in the regional town of Jilib, which works as a sort of capital. Al-Shabaab was reported to be accounting for approximately 27% of the total number of security incidents.

The main source of security incidents in Middle Juba is counter-insurgency targeting Al-Shabaab.

Nearly all the incidents attributed to Al-Shabaab affected civilians with only one incident involving exclusively Al-Shabaab members. Executions by Al-Shabaab were reported following accusations of spying or assisting US forces in air strikes targeting Al-Shabaab militants and officials. For example, in early March 2021, the group reportedly executed five people accused of working for US intelligence in Jilib town and five other alleged spies (who were also accused of murder) in Bu’aale town.

The majority of the recorded security incidents were airstrikes or drone strikes operated by the US armed forces, with peaks in incident numbers reported in February (7 strikes) and May 2020 (5 to 12 strikes, according to different sources). The deadliest strike occurred in September 2020 in Jilib district, resulting in 17 deaths, followed by a strike in the same district in December 2020, resulting in 8 deaths. These strikes have reportedly also resulted in civilian casualties. For example, on 7 April 2020, two civilians were killed and one injured when an US airstrike targeted Al-Shabaab fighters in Jilib. Also, an AFRICOM airstrike on a house in Jilib, on 2 February 2020, killed a young woman and injured three of her family members.

Abductions of businessmen by Al-Shabaab for unknown reasons are also reported.

ACLED recorded 48 security incidents (an average of 0.6 security incidents per week) in Middle Juba between 1 January 2020 and June 2021. Out of those incidents, 7 were coded as battles, 29 as explosions/remote violence, and 12 as violence against civilians.

During the reference period, security incidents occurred in all three districts, with the largest overall number being recorded in Jilib (29 incidents).

In the reference period, ACLED recorded a total of 145 fatalities in the region. Compared to the figures for the population in the region as from 2014, this represents 40 fatalities per 100 000 inhabitants.

Between January 2020 and May 2021, PRMN reported an estimated 16 000 new displacements from Middle Juba. Most people displaced relocated within the same region, with only around 3 000 displaced to neighbouring regions like Lower Jubba and Gedo. Over 3 000 persons were displaced by conflict and insecurity, in this period. Meanwhile, PRMN recorded 35 000 arrivals of displaced persons in Middle Juba, more than half of whom were from neighbouring regions, especially Bay and Gedo.