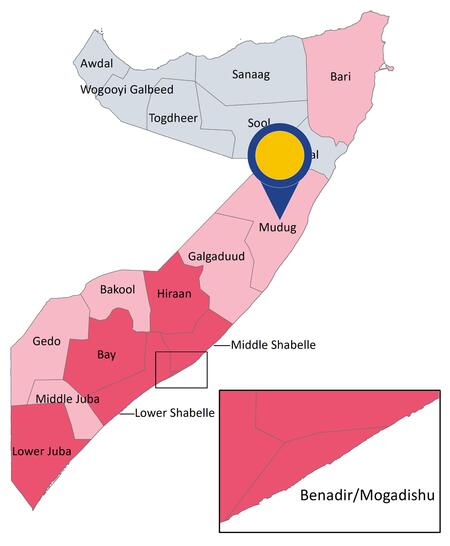 Mudug consists of five districts and Gaalkacyo is the regional capital.

In 2014, UNFPA and Somali authorities estimated the population of Mudug region at 717 863 inhabitants.

In southern Mudug which is controlled by the Galmudug administration, the main actors are Al-Shabaab and the Saad clan, along with Galmudug and the FGS security forces. It is to a large extent contested by Al-Shabaab, when not fully controlled by the group. The various clans inhabiting the area (Saad is the main one) are resisting Al-Shabaab’s expansion. However, Al-Shabaab has recently been reaching for the first time the Saad area as well as expanding its control/influence in the area around and beyond Baadweyne, Hobyo, etc.

The local administration of Galkacyo is very loose, however, the two sides of the town administration (Galmudug’s and Puntland’s) have not experienced any major clash since 2016. This cooperation has also led to the dismantling of the various Al-Shabaab cells in town. Still, in recent years, assassinations allegedly backed or orchestrated by Al-Shabaab have been reported in the city.

Clan disputes have also been reported in the region.

In northern Mudug which is controlled by the Puntland administration, Al-Shabaab presence and related activities are increasing along and across the border with southern Mudug. Within this context, Mudug’s regional governor was killed in May 2020, along with a few other targeted assassinations.

Mudug’s northern part is affected by the long-standing clan contentions. These competitions from the rural areas often spill over to Galkacyo.

Al-Shabaab was the actor accounting for around 24% of the reported security incidents, with the majority of these involving the Military Forces of Somalia, followed by incidents involving civilians and then different clan militias as well as police forces. The main types of Al-Shabaab related incidents were armed clashes followed by remote-controlled explosives. Indicatively, in June 2021, Al-Shabaab militants attacked a military base in the town of Wisil killing 17 soldiers and 13 civilians. Other incidents attributed to Al-Shabaab included IED explosions near a stadium, at an army base and at a local militia’s military base. Civilians were also among the casualties.

During the reference period, security incidents occurred in all five districts, with the largest overall number being recorded in Galkacyo (78 incidents).

In the reference period, ACLED recorded a total of 230 fatalities in the region. Compared to the figures for the population in the region as from 2014, this represents 32 fatalities per 100 000 inhabitants.

Infrastructure such as roads, waste management and water supply were described as poor and their state exacerbated by years of conflict.

The work of humanitarian aid organisations was burdened by access incidents and violent acts against staff members.