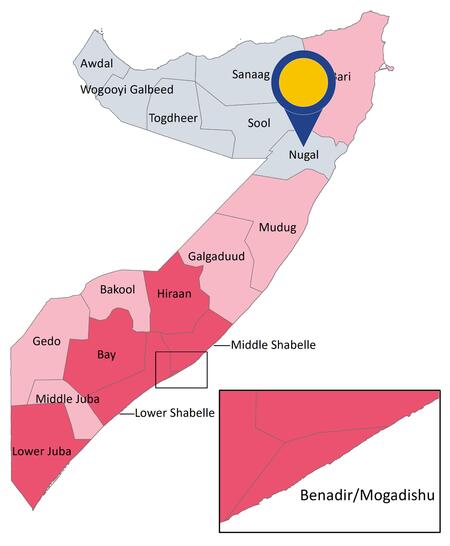 Nugal is located in Puntland in the north-east of Somalia and it consists of three administrative districts. The region’s capital is Garowe. Garowe is also the capital of Puntland, where the executive, parliamentary and judiciary branches of the state are based [Socio-economic 2021, 2.1]. As of July 2021, international and domestic flights appeared to be landing in Garowe airport [Socio-economic 2021, 2.2.1] .

Most of Puntland’s population comes from the Darood/Harti descent group. From a clan perspective, Nugal is rather homogenous, with the Issa Mahmud almost completely dominating the region and with Omar Mahmud clan, still from the Darood/Harti group, dominant in the southern part of Nugal and in north Mudug. Another smaller clan, the Awrtable, inhabits the area close to the Eyl port town.

In 2014, UNFPA and Somali authorities estimated the population of Nugal region at 392 698 inhabitants.

Puntland’s state administration and security apparatus are reportedly fully in control of the Nugal region.

Al-Shabaab presence and activities in the region have also been reported during the reference period.

There are no major ongoing clan conflicts. At times, small-scale clan frictions take place in the area close to Garowe; however, these tensions are usually solved through customary law and they do not turn into full-fledged or large-scale conflicts.

About one third of incidents recorded by ACLED in the reporting period were clan confrontations and clashes between different tribal militia or tribal militia and security forces, in many cases related to disputes over land.

Al-Shabaab was reportedly involved in two security-related incidents, the shooting of a civilian in Garowe in February 2020 and a suicide bombing in March 2020 targeting the governor of Nugal and leading to two deaths.

Incidents of shootings against state officials and a grenade explosion have also been reported.

In the reference period, ACLED recorded a total of 16 fatalities in the region. Compared to the figures for the population in the region as from 2014, this represents approximately 4 fatalities per 100 000 inhabitants.

The existence of checkpoints manned by security forces, district officials or police officers from the local municipality who collect fees as well as bribes has been reported [Socio-economic 2021, 2.2.2.2].