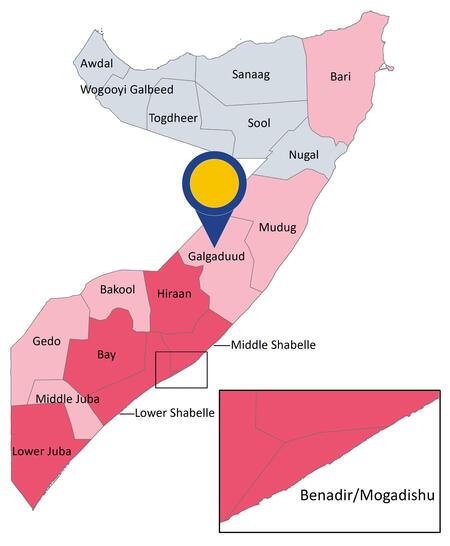 Galgaduud region is located in central Somalia and consists of five districts. The region’s capital is Dhusamareb.

It is mainly inhabited by the Saad, the Suleiman (also Suliman or Saleban) and Ayr (also Cayr) - these two from the Hawiye-Habr Gidir clan group, Duduble and Murasade (Hawiye), Marehan (Darood), and the Dir clan groups.

In 2014, UNFPA and Somali authorities estimated the population of Galgaduud region at 569 434 inhabitants.

In Galgaduud there is an on-going confrontation between Al-Shabaab and anti-Al-Shabaab forces.

The five major clans in Galgaduud control the west or the north-western part of the region, which is completely free from Al-Shabaab. Most major clans have their own militias, with soldiers at times serving as government forces and at times fighting for the clan militia of belonging. Habar Gidir clan militias or sub-clan militias were reportedly the actors accounting for around 28% of the security incidents. However, even in towns under state control, Al-Shabaab’s presence is visible as the group taxes and extorts money.

Al-Shabaab is fully in control of the south-eastern part of Galgaduud, up to the coast. They are also taking over most of the rural areas of the region and making attempts at penetrating further into uncontested areas. However, even in these towns, Al-Shabaab’s presence is visible as the group taxes and extorts money. The area fully controlled or highly contested by Al-Shabaab is mainly inhabited by Hawiye clans who reportedly perceive the group as a convenient partner. Al-Shabaab was reportedly the actor accounting for around the 25% of the security incidents.

Clan rivalries in the region also make Galgaduud one of the main theatres of clan confrontation in Somalia. Especially in the north-western regions, clan rivalries are more vivid and free to surface as violently as they can be, also in reason of the fact that there is no Al-Shabaab presence.

ASWJ used to be the most powerful military actor in the state and was later to a large extent demobilised and integrated into Galmudug’s forces and the SNA.

The majority of incidents attributed to Habar Gidir clan militias or sub-clan militias were armed clashes followed by attacks against civilians. Indicatively, 4 people were reportedly killed and 26 wounded in an inter-clan conflict between the Wagardhac of Marehan and the Saleeban of Habar Gidir in Balli-Cad village in Caadado district on April 6, 2020.

Armed clashes and the use of remote-controlled explosives were the main type of incidents attributed to Al-Shabaab, followed by abductions and forced disappearances or attacks against civilians. For example, on 1 February 2021, Al-Shabaab launched a mortar attack on Dhusamareb while federal and state leaders were meeting, reportedly injuring between zero and four people. Furthermore, nine Al-Shabaab attacks between January and November 2020 in Dhusamareb, left two soldiers and three civilians dead.

During the reference period, security incidents occurred in all districts of the region, with the largest overall number being recorded in Dhusamareb (78 incidents) followed by Caabudwaaq (24 incidents).

In the reference period, ACLED recorded a total of 189 fatalities in the region. Compared to the figures for the population in the region as from 2014, this represents 33 fatalities per 100 000 inhabitants.

Between January 2020 and May 2021, PRMN reported an estimated 58 000 new displacements from Galgaduud. Conflict and insecurity were reportedly the main reasons of nearly all displacements. Meanwhile, PRMN recorded 2 000 arrivals of displaced persons from Mudug.

Humanitarian actors reported difficulties in providing assistance due to the volatile security situation. Twenty incidents of humanitarian workers being unable to access sites were reported in 2020.