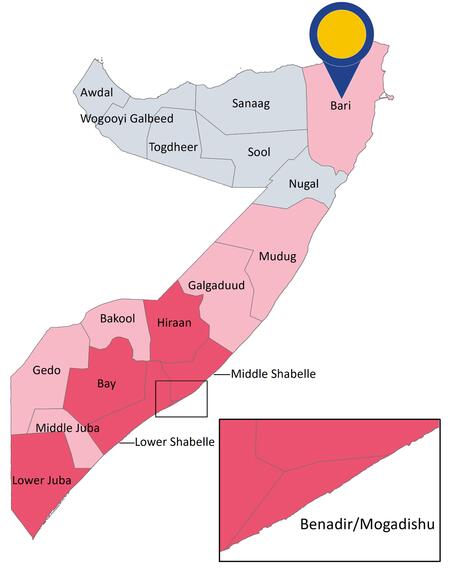 Bari region, the largest in Somalia, consists of six districts. The region’s capital is Bosasso, the largest city in Puntland and an important port [Socio-economic 2021, 2.1].

The dominant clan in the Bari region is the Osman Mahmud, still of the Majeerteen macro clan, of the Darood-Harti clan group. The Ali Suleman clan is also politically extremely relevant in the region. A number of smaller sub-clans, such as Ali Jibrail, Dashishe, Kaptanle, and others, inhabit the area south and south-east of Bosasso.

In 2014, UNFPA and Somali authorities estimated the population of Bari region at 719 512 inhabitants.

The main actors in the area are Majerteen sub-clans, Al-Shabaab, ISS and Puntland’s security forces.

Puntland security forces claim to control the majority of Bari region. However, it has been reported that anything north-west of Bosasso, along that strip of land that borders the Gulf of Aden, is under the control or contested by Al-Shabaab. It further holds a military base west of Bosasso, in the Golis mountains where they have reportedly stored a large amount of heavy ammunition taken from AMISOM and SNA bases in 2017. Small clans located in the region tend to side or sympathise with Al-Shabaab.

As of September 2020, although degraded in its operational capabilities, ISS has retained a steady but small presence in northern Somalia and Bari region is the cradle of many ISS fighters. Reportedly the group’s operational basis remains in the Golis Mountains and south of the port town of Qandala. Allegedly, ISS also has support networks within the Puntland governing structures, especially in Galkacyo and Bosasso. In the course of 2020, ISS attempted to enlist new fighters. A more recent source indicated that most of the threats posed by ISS have been addressed by the current Puntland government.

With regard to the relationship between Al-Shabaab and ISS, an expert noted that at times they fight against each other, while at times the two groups are allies against the Puntland forces.

Furthermore, several clan conflicts typically driven by the competition over resources and land are also reported in the Bari region.

Incidents of armed clashes, shelling/artillery/missile attacks and the use of remote-controlled explosives have been attributed to Al-Shabaab. For example, in June 2021, Al-Shabaab claimed responsibility for a roadside blast that targeted a convoy of the security minister of Puntland near Bosasso city, killing one soldier and wounding three others. Furthermore, inMarch 2021, the central prison of Bosasso was attacked by Al-Shabaab and more than 300 prisoners were freed, while several security officers were killed in the attack.

Armed clashes, assassinations and explosions have also been attributed to ISS. In July 2020, fighting broke out between Puntland Defence Forces and ISS fighters in the remote mountainous region of Bari which according to Puntland military led to eight ISS casualties.

The military forces of Puntland have been mainly involved in battles. In April 2021, clashes between Puntland forces and Al-Shabaab as well as clashes with ISS elements were reported, leading to several casualties.

U.S. forces have also conducted an airstrike in July 2020 targeting ISS in Iskushuban district, with no civilian casualties.

Furthermore, PMPF has carried out raids into people’s homes that have at times lead to the death of civilians.

Security incidents occurred in 5 out of 6 districts of Bari region with the largest overall number being recorded in Bosasso district (66 incidents).

In the reference period, ACLED recorded a total of 176 fatalities in the region. Compared to the figures for the population in the region as from 2014, this represents approximately 24 fatalities per 100 000 inhabitants.

In 2021, the estimated total number of IDPs in Puntland by UNHCR is 388 500 [Socio-economic 2021, 2.1.1.1]. Between January 2020 and May 2021, PRMN reported an estimated 45 000 new displacements from Bari. In this period, only over 100 individuals named conflict/insecurity as the reason for displacement. In 2020, additional 800 new conflict or insecurity related displacements to Bari were registered from Benadir, Hiraan, Bay, Lower Shabelle and other regions. Bosasso attracts large numbers of internally displaced people.

The existence of checkpoints manned by security forces, district officials or police officers from the local municipality who collect fees as well as bribes has been reported [Socio-economic 2021, 2.2.2.2].

Criminality, including arms smuggling and human trafficking have been reported in the region.