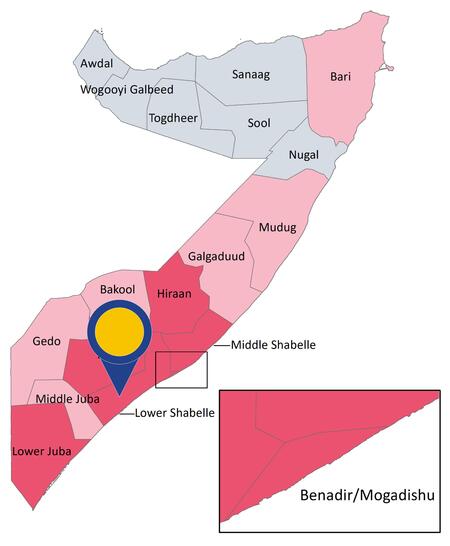 Bay region is located at the south-west of Somalia and consists of four districts. The region’s capital is Baidoa which also serves as the de facto capital of South-West state, though officially the capital is Baraawe in Lower Shabelle region. Baidoa is the largest city in the region.

Bay region is one of the few zones in Somalia where rainfall is adequate to sustain rainfed agriculture, and the region’s economy is mainly based on subsistence farming and agro-pastoralism. The region has considerable strategic and commercial importance. The paved road from Mogadishu through Baidoa to Gedo region and the Kenya border is one of the most important commercial arteries in the country.

In 2014, UNFPA and Somali authorities estimated the population of Bay region at 792 182 inhabitants.

Al-Shabaab predominantly controls the rural areas. South-West state and federal state forces are in control of the main towns instead, such as Baidoa, Burhakaba, Dinsor, which are like islands encircled by Al-Shabaab’s or contested territory. Reportedly Al-Shabaab also controls access to water, electricity, and education services in Baidoa, besides offering access to justice via mobile courts.

The main source of conflict in Bay is the on-going armed confrontation between Al-Shabaab and anti-Al-Shabaab forces, among which notably federal and state forces which are politically and militarily aligned.

Inter-clan tensions over land, crimes, and other matters periodically flare up in the region, but in recent years have been managed and contained, producing a pattern of frequent security incidents but relatively low casualty levels. In terms of clan rivalries, during the reference period no major disputes (or long-running clan conflicts) were reported or were relevant in the Bay region.

The incidents related to Al-Shabaab involved either Somali military or police forces, or AMISOM and mostly were coded as armed clashes. Al-Shabaab was also responsible for violence targeting civilians, including attacks and cases of abduction/forced disappearance.

Eight aerial strikes by the US were recorded killing at least 22 Al-Shabaab members. A US drone strike against an Al-Shabaab stronghold was also recorded.

South-West state, Bay region included, constitutes one of the three FMS (along with Benadir and Hirshabelle) where IEDs are regularly encountered [Security 2021, 2.2.4]. A significant increase in IED activities was reported in 2020 in comparison with 2019. These incidents mainly occurred along one main supply route that leads through Bay region and into Gedo region and accounted for 11% of all IED incidents documented in Somalia in 2020.

Illustrative security incidents include, for example, a suicide attack carried out by Al-Shabaab in a restaurant in Baidoa, targeting the Governor of Bay region on 10 April 2021, with five people reportedly losing their lives and another eleven injured. On 27 January 2021, an explosion in a restaurant in Dinsoor killed a soldier and wounded at least five other people. Earlier, on 4 July 2020, four people were killed by a landmine planted in a restaurant in the outskirts of Baidoa.

Al-Shabaab also conducted a complex attack on the SNA base in Gofgadud Burey, maintaining control over the base for three days.

On 23 and 24 May 2020, Al-Shabaab carried out two attacks in Baidoa and Dinsoor, targeting civilians during Eid celebrations. These attacks reportedly left seven people dead and more than 40 injured.

Security incidents occurred in all districts of Bay with the largest overall number being recorded in Baidoa (193 incidents).

In the reference period, ACLED recorded a total of 493 fatalities in the region. Compared to the figures for the population in the region as from 2014, this represents approximately 62 fatalities per 100 000 inhabitants.

Between January 2020 and May 2021, PRMN reported an estimated 132 000 new displacements from Bay. Most people displaced from their homes in Bay relocated to other places within the same region, with around 19 000 displaced to other regions, especially neighbouring Gedo and Middle Jubba. Conflict and insecurity were the main reason for displacement in Bay across both years, followed by drought.

In Bay, goods are free to reach Baidoa from Mogadishu for instance, once taxed by Al-Shabaab. However, Al-Shabaab enhanced its existing economic blockade on the government-controlled town of Dinsoor, conducting a series of attacks targeting the transport of commercial goods to the town.

Furthermore, in Bay, 31 incidents that hindered humanitarian organisations from accessing populations in need, were recorded, the highest figure among Somalia’s regions.