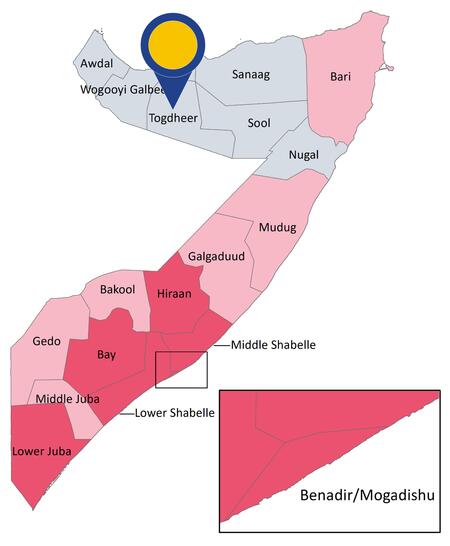 Togdheer region consists of four districts and its capital is Burco.

Togdheer region is predominantly inhabited by Habar Yunis and Habar Jeelo clans. The area west of Burao is inhabited by Idagalle, along with other minority sub-clans that are considered part of the Habar Yunis major clan.

In 2014, UNFPA and Somali authorities estimated the population of Togdheer region at 721 363 inhabitants.

Al Shabaab maintains a quiet network in Somaliland, mainly for purposes of finances and recruitment.

Inter and intra-clan disputes, involving clan militias, over land and water have been reported. A source has indicated that the real issue is actually linked to clan growth and expansion dynamics.

In September 2020, it was reported that Somaliland security forces arrested several terror suspects and seized weapons and explosive devices in Burao town.

Togdheer is the site of disputes and clan confrontations and feuds. For example, sub-clan militias engaged in military confrontations on clan revenge grounds in and around Buhodle in January-February of 2021, resulting in various casualties and fatalities. Among others, security incidents related to clan conflicts do not always receive local media attention and hence might go under-reported in Somalia.

In March and April 2021, two operations of the Puntland security forces against respectively Al-Shabaab and ISS affiliated groups were reported in Odweine district, killing a number of militants.

On November 2020, an IED by an unknown group exploded when a school bus was passing by in Burco district, causing three to seven casualties.

Security incidents occurred in 3 out of 4 districts of Togdheer region with the largest overall number being recorded in Buhodle district (16 incidents).

In the reference period, ACLED recorded a total of 49 fatality in the region. Compared to the figures for the population in the region as from 2014, this represents approximately 7 fatalities per 100 000 inhabitants.

Between January 2020 and May 2021, PRMN reported 11 000 new displacements from Togdheer, with the majority being within the region. In this period, conflict and insecurity led to the displacement of 1 010 cases. In 2020 and until May 2021, additional 870 displacements to Togdheer were registered from Sool.

The presence of entry and exit checkpoints at each district within Somaliland has been reported [Socio-economic 2021, 3.2.2.1].