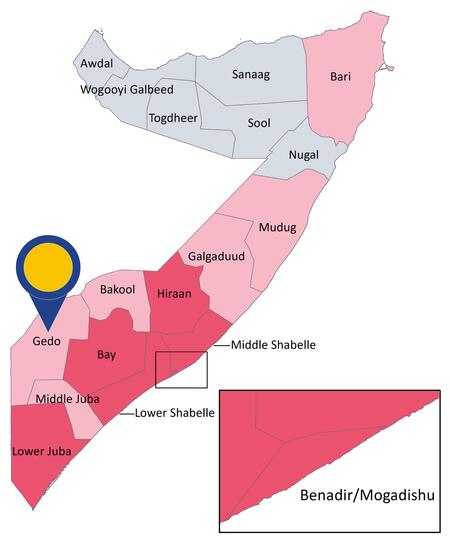 Gedo is located in the south-west corner of the country. It is the second-largest region by territorial size in Somalia and it consists of six districts. The region’s capital is Garbahaarey.

The clan composition of Gedo is diverse. The largest and most politically and militarily powerful clan is the Marehan (Darood), who constitute about half or more of the total population. The Rahanweyn (or Digil-Mirifle) clan also predominates in some areas. Hawiye clans are also present in the area.

In 2014, UNFPA and Somali authorities estimated the population of Gedo region at 508 405 inhabitants.

The underdevelopment of the Gedo region contributes to endemic communal conflicts over resources and to clan clashes over control of valued trade towns.

The Marehan exercise hegemonic control over Gedo region and this fuels endemic clashes between the Garre and Marehan, as well as chronic tensions between the Marehan and Rahanweyn clans. Also, Marehan sub-clans (indigenous versus relocated Marehan) frequently clash among them over power, eldership, and resources. The Marehan are also divided by allegiance to or opposition to Al-Shabaab, which has a strong presence in Gedo and which recruits heavily from the Marehan.

The main actors in the area can be grouped as follows: (1) the FGS troops, (2) militia forces associated with Jubbaland regional state, and finally (3) Al-Shabaab armed forces. Clan and subclan militias frequently move between these forces, forging tactical and temporary alliances. AMISOM as well as Kenyan and Ethiopian troops, although present, are less active except for periodic (usually retaliatory) attacks on Al-Shabaab bases.

Al-Shabaab controls most of the rural areas in Gedo, while major towns are like islands under the control of the state and/or other forces (federal, foreign, AMISOM). Al-Shabaab also maintains an active network of informants and operatives in Gedo region towns. Gedo represents for Al-Shabaab a somewhat strategic area being at the border with foreign countries, Kenya and Ethiopia. Al-Shabaab was responsible for 58% of the reported security incidents between January 2020 and June 2021.

The rivalry between the FGS and Jubbaland state has been played out in Gedo region, where forces loyal to Jubbaland President Ahmed Madobe have clashed with SNA forces inserted into Gedo region by FGS President Mohamed Abdullahi Farmaajo.

Armed clashes accounted for the majority of security incidents attributed to Al-Shabaab, followed by the use of remote-controlled explosives, landmines or IEDs and attacks against civilians. For example, in August 2020 Al-Shabaab reportedly conducted an IED attack on a teashop in Beled Xaawo where SNA members and civilians were present, killing eight people. Al-Shabaab has also reportedly conducted executions of three district officials following the relocation of SNA forces in one incident as well as individuals accused of spying or sorcery in another.

Clashes were also reported between the SNA and Jubbaland forces. As a result, combatants and civilians were killed and displacement was significantly increased. Indicatively, in late January 2021 fighting in Beled Xaawo left 21 people dead, most of them children, and resulted in further displacement.

Several protests were also reported against the presence of (non-AMISOM) Kenyan forces, over accusations that they attacked locals and abducted three individuals, killing one of them.

ACLED recorded 151 security incidents (an average of 1.9 security incidents per week) in Gedo region between 1 January 2020 and June 2021. Out of those incidents, 76 were coded as battles, 45 as explosions/remote and 30 as violence against civilians.

During the reference period, security incidents occurred in all districts of Gedo with the largest overall number being recorded in Beled Xaawo and Bardheere (33 incidents each), followed by Garbaharrey (31 incidents).

In the reference period, ACLED recorded a total of 146 fatalities in the region. Compared to the figures for the population in the region as from 2014, this represents 29 fatalities per 100 000 inhabitants.

Between January 2020 and May 2021, PRMN reported an estimated 105 000 new displacements from Gedo. Most displacements occurred within Gedo, with a minority of around 3 000 people displaced to neighbouring Middle Juba. In this period, 44 000 cases of displacement were caused by conflict and insecurity.