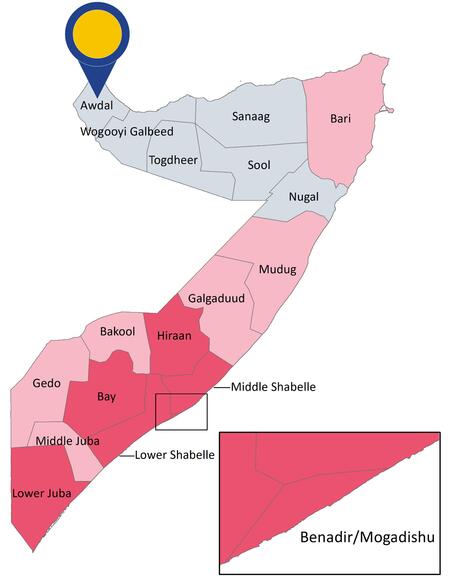 Awdal region consists of four districts and its capital is Borama.

Awdal is inhabited by the Dir clans, Gadabursi and Issa, with the regional capital Borama at the centre of the Gadabursi territory.

In 2014, UNFPA and Somali authorities estimated the population of Sanaag region at 673 263 inhabitants.

Al-Shabaab maintains a quiet network in Somaliland, mainly for purposes of finances and recruitment.

Furthermore, the presence of clan militias in Awdal region has been reported.

Clashes between clan militias and Somaliland forces have been reported, mainly in the context of disputed land ownership.

On September 2020, a Somali news website reported a bomb attack at the Somaliland Ministry of Finance compound in Boroma that injured one employee. This incident could not be corroborated by other sources.

In the reference period, ACLED recorded a total of 1 fatality in the region. Compared to the figures for the population in the region as from 2014, this represents less than 1 fatality per 100 000 inhabitants.

Between January 2020 and May 2021, PRMN reported 11 000 new displacements from Awdal, with almost all being within the region. In this period, conflict and insecurity led to the displacement of 10 cases. In 2020, additional 14 displacements to Awdal were registered from Sanaag and Nugal.

The presence of entry and exit checkpoints at each district within Somaliland has been reported [Socio-economic 2021, 3.2.2.1].