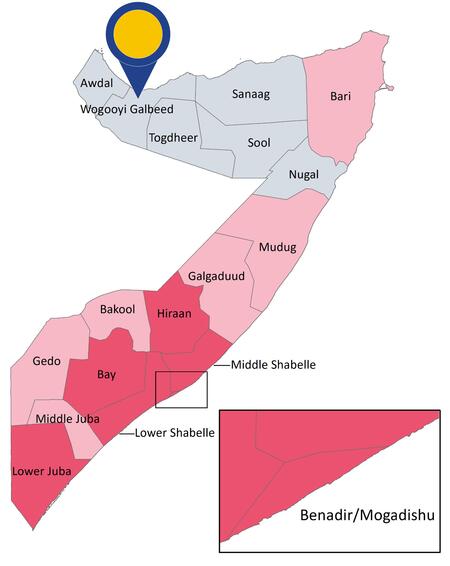 Wogoyi Galbeed region consists of three districts and its capital is Hargeisa. Hargeisa is also the capital of Somaliland.

Hargeisa has become the biggest urban setting in Somaliland, has been almost entirely rebuilt, and has expanded rapidly in both size and density [Socio-economic 2021, 3.1].

Wogooy Galbeed is predominantly inhabited by the Habar Awal clan. The other two main clans in the region are Habar Yunis and Idagalle. As to the state capital, Hargeisa, its neighbourhoods are strongly clan related, with the town territory partitioned among the various clans and sub-clans present in town: mainly Habar Awal, Habar Yonis, Habar Jeelo, Idagalle, but also minority groups.

In 2014, UNFPA and Somali authorities estimated the population of Wogoyi Galbeed region at 1 242 003 inhabitants.

Al-Shabaab maintains a quiet network in Somaliland, mainly for purposes of finances and recruitment.

Furthermore, the presence of clan militias in Wogoyi Galbeed region has been reported.

Armed clashes between clan militias have been reported. For example, in July 2020, an armed clash between two sub-clans caused two fatalities and six injuries, in connection with a land dispute and ongoing clan revenge.

On December 2020, two boys were killed after an unexploded ordnance detonated on the outskirts of Berbera town.

Security incidents occurred in 2 out of 3 districts of Wogoyi Galbeed region with the largest overall number being recorded in Hargeisa district (3 incidents).

In the reference period, ACLED recorded a total of 9 fatalities in the region. Compared to the figures for the population in the region as from 2014, this represents approximately 1 fatality per 100 000 inhabitants.

Between January 2020 and May 2021, PRMN reported 2 700 new displacements from Wogoyi Galbeed, mostly to Mudug. In this period, conflict and insecurity led to the displacement of 4 cases. In 2020 and until May 2021, additional 2 230 displacements to Woqooyi Galbeed were registered from other Somaliland or neighbouring regions.

The presence of entry and exit checkpoints at each district within Somaliland has been reported. There are also checkpoints on all the roads leading in and out of the Hargeisa city, even though not affecting the accessibility or mobility of residents [Socio-economic 2021, 3.2.2.1].