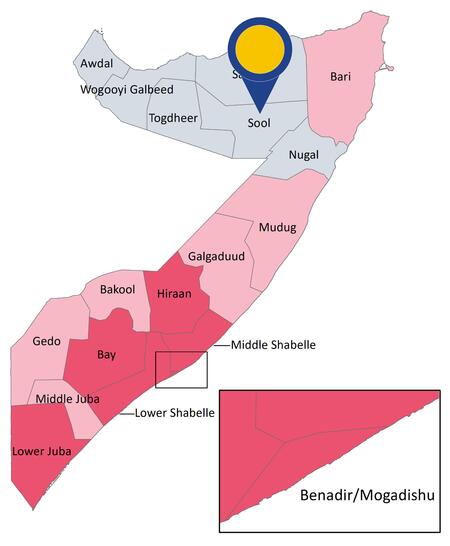 Sool region consists of four districts and its capital is Laas Anood.

Sool is inhabited primarily by Dhulbahante, a Darod sub-clan, which is part of the Harti confederation together with the Majerteen clans of Puntland. Isaaq clan has also presence in some parts of Sool region.

In 2014, UNFPA and Somali authorities estimated the population of Sool region at 327 428 inhabitants.

Puntland and Somaliland dispute over political and military control of areas of the Sool and Sanaag regions as well as the area of Ayn, part of Togdheer region. Sool and Sanaag fall within Somaliland’s boundaries, as per the old Anglo-Italian border and protocol and as put forward by the Somaliland government. However, the two dominant clans in the area (Warsangeli and Dhulbahante) belong to the same Darood/Harti clan family for which Puntland constitutes the core and institutional ‘home’.

Sool local authorities have repeatedly switched sides between Puntland and Somaliland in the past, with the latest sources indicating that the Dhulbahante majority is now siding with the Somaliland administration. Somaliland has not managed to expand its areas of control all the way to the boundary between Sool and Nugal regions, which would correspond basically to the ex-British Somaliland border.

The presence of both Somaliland and Puntland armed forces has been reported. Tukaraq, in Sool region, among others, has been the centre of major fighting between the two states in the past few years (2018-2020).

In the context of the Somaliland-Puntland confrontation, fighters were captured and detained by both parties.

Tensions between Puntland and Somaliland in disputed areas reportedly heightened as a result of elections.

In terms of clan rivalries, Sool region is a highly disputed area presenting numerous conflict dynamics. Several inter and intra-clan disputes, involving clan militias, over water wells have been frequently reported. A source has indicated that the real issue is actually linked to clan growth and expansion dynamics. Inter-clan disputes (Isaaq-Darood clan families) have a higher tendency to escalate.

Inter and intra-clan disputes have led to armed clashes, revenge killings, casualties and displacement. For example, in April 2021 a clash between sub-clan militias resulted in several clan members fatalities. Clan militias have been also responsible for an attack in Las Anood prison leading to clashes with police and two civilian fatalities.

An attack on a polling station resulting in at least three fatalities and an IED explosion killing three civilians have also been reported.

Furthermore, clashes between Somaliland and Puntland forces were reported in February 2020, with no fatalities recorded.

Security incidents occurred in 3 out of 4 districts of Sool region with the largest overall number being recorded in Las Anood district (23 incidents).

In the reference period, ACLED recorded a total of 27 fatalities in the region. Compared to the figures for the population in the region as from 2014, this represents approximately 8 fatalities per 100 000 inhabitants.

Conflicts between Somaliland and Puntland forces and clan clashes have affected the lives and livelihoods of civilians, as well as access to humanitarian aid. For Sool region, seven incidents of humanitarian workers being unable to access sites were reported in 2020.

In terms of internal mobility and security, Somalis can in general freely move around Puntland without too many security concerns. Exceptions are the contested area in Sool and Sanaag or areas where Al-Shabaab has presence such as around the Galgala Hills.

Harassment against journalists when they reported on government shortcomings or union with Somalia was reported, particularly in the Sool and Sanaag regions.