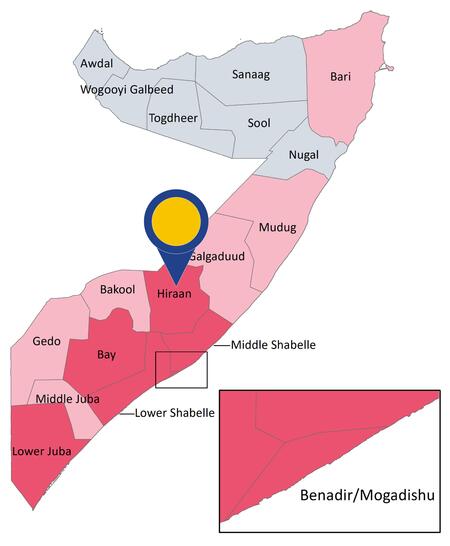 Hiraan region is located in the south-west of Somalia and consists of three districts. The region’s capital is Belet Weyne.

In 2014, UNFPA and Somali authorities estimated the population of Hiraan region at 520 685 inhabitants.

Hiraan is among the regions most affected by clan conflicts. A first source of conflict is the demand, which is put forward in particular by the Hawadle clan, that Hiraan should constitute a regional state per-se, and it should not be part of Hirshabelle. This conflict led to military confrontations between the Hawadle and the Abgal clans.

Other potential sources of conflicts/confrontations in the region are the perceived domination of the Abgaal and Hawadle at the expense of other (minority) clans, and the tensions between pastoral clans (Hawadle/Galjeel/Jajele/Baadi Adde) and Bantu agriculturalist groups (such as Makane in Hiraan).

The other major source of conflict in the region is the on-going military confrontation between Al-Shabaab and anti-Al-Shabaab forces, be they state forces, federal forces, AMISOM or other local militias. Al-Shabaab controls the rural areas while state and federal forces, with the help of AMISOM’s Djibouti contingent control the major towns of the region. Al-Shabaab, was involved in 56% of the incidents in Hiraan between 1 January 2020 and 30 June 2021.

A decrease in IED-related incidents in Hiraan in 2020 has been reported. This was attributed to the IED clearance operations carried out by security forces between population centres in 2019. Security incidents related to Al-Shabaab involved either Somali military, polices forces or AMISOM, and clan militias and were mostly coded as armed clashes. Al-Shabaab’s violence targeting civilians included attacks and cases of abduction or forced disappearance. Armed clashes between clan militias were also recorded.

In June 2020, the conflict between the Hawadle (Hawiye) and the Reer Aw Hassan (Ashraf) over access to land resulted in the killing of 16 persons.

Illustrative security incidents include clashes between members of the Hawadle-Agoon and Habar Gidir-Ayr (both subclans of Hawiye) near Belet Weyne district’s Matabaan town on 24 November 2020 (5 people killed and 10 others injured), and fighting over land between members of the Reer Hassan (a group associating themselves with the Ashraf) and the Hawadle near Belet Weyne town on 16 June 2020, resulting in 9 deaths.

Besides clans related security incidents, on 18 August 2020, an unclaimed explosive attack in front of a stadium in Belet Weyne reportedly killed four people, including two police officers. On 13 February 2020, in Beletweyne, Ethiopian troops accidentally clashed with (anti-Al-Shabaab) Macawiisleey militia, reportedly killing at least 10 of their members and wounding 8 others. Meanwhile, a local radio source reported that at least 20 militiamen were killed.

Security incidents occurred in all 3 districts of Hiraan with the largest overall number being recorded in Belet Weyne (145 events).

In the reference period, ACLED recorded a total of 274 fatalities in the region. Compared to the figures for the population in the region as from 2014, this represents approximately 53 fatalities per 100 000 inhabitants.

Between January 2020 and May 2021, PRMN reported an estimated 319 000 new displacements from Hiraan, virtually all within the same region. Conflict and insecurity were reported to be the second most prevalent reason for displacement during the first five months of 2021, resulting in an estimated 6 000 displacements, almost all reported in Belet Weyne district.

Insecurity has disrupted trade flows in parts of Hiraan (Bulo Burto and Jalalaqsi), and clan violence has cost livelihoods and resulted in the displacement of families. In 2020, UNOCHA recorded 21 incidents in Hiraan that hindered humanitarian organisations from accessing populations in need.

In terms of road security, it has been reported Al-Shabaab attacked trucks using the main supply routes in Hiraan which represents an ongoing and long-lasting situation because of Al-Shabaab’s economic blockades. The situation on the road from Balcad to Jowhar (Middle Shabelle) and the rest of the road to Belet Weyne has deteriorated with an effect on aid programs. [Security 2021, 2.4.3]