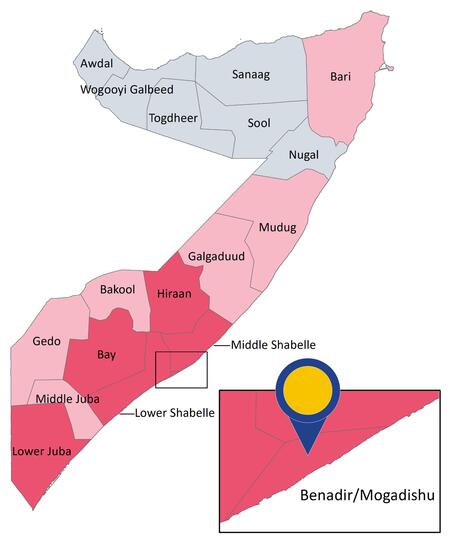 Benadir region is located in the south-east of Somalia and covers mostly the same area as the city of Mogadishu, Somalia’s capital. Benadir comprises the 17 administrative districts of the capital Mogadishu, which make it, by far, the most populated administrative region in Somalia.

The dominant clan family is the Hawiye, with several sub-clans. Other Somali clans also reside in the city, although with the ‘status of guests and limited rights’, and several mixed neighbourhoods exist. The Darood clan family – which dominates over some neighbourhoods - and minorities such as Dir, Digil-Mirifle, Yibr (Sab) and Sheikhal, for example, are present. The significant number of IDPs has contributed to the heterogenic ethnic make-up of the city.

Mogadishu is officially controlled by the FGS security institutions and AMISOM. At the same time, Al-Shabaab has heavily infiltrated the state apparatus and exerts its activities in the city, including tax collection and terrorist attacks. The presence and dominance of clan militia is also an important factor influencing the security situation in the city.

It is reported that the various federal, regional and district security forces present in Mogadishu often clash with one another. They generally answer to clan authorities rather than to a governmental chain of command. Private military and security companies are also operating in Mogadishu, primarily providing security to internationals and tasked with risk management services, armed security, and convoy protection, while playing the role of ‘gatekeepers’ between the green zone – a zone surrounding Mogadishu’s highly secured airport zone and where internationals and governmental officials reside, and the city.

Two major conflicts characterise the security situation in Mogadishu. The first one opposes Al-Shabaab and anti-Al-Shabaab actors. According to experts, Al-Shabaab does not directly control any locations in the city but rather acts as a network, hiding among the population. It is reported that it is located in the periphery of the city while its influence is pervasive. To address the security threat posed by Al-Shabaab, in the course of 2019 the FGS, AMISOM, UNSOM, as well as other international bodies and donors, launched the Mogadishu Security Plan, which included, among others, the construction of six checkpoints in the Somali capital, and the establishment of an assets management system under the responsibility of the Somali Police Force. Al-Shabaab was involved in 62% of the incidents in Benadir between 1 January 2020 and 30 June 2021.

The second main conflict in Mogadishu consisted of confrontations between incumbent’s government allied support and forces, and opposition groups, especially from the dominant Hawiye clan family. This more political confrontation, which is tied to the electoral process, has at times escalated into military clashes, and has the potential to mobilise armed groups and (clan) militias.

A number of clan and personal militias are present and easily mobilised in Mogadishu. Their mobilisation has occurred on more than one occasion during the first months of 2021 in the context of ongoing political and electoral impasse whereby the incumbent government and opposition forces clashed against each other. Clan militias and protection forces are the main source of protection for residents and a primary reason for clans to cluster together in neighbourhoods. With few exceptions, only the Hawiye clans have these clan militias in the city.

Besides those main actors, the ISS branch, which maintains a presence in Puntland, was also reported to have committed ‘sporadic attacks’ in the city [Targeting, 6]. While they shifted their focus towards Mogadishu in 2017, it was indicated that in the period May 2020 – February 2021, the group’s activities in Mogadishu have been very limited [Actors, 6.1].

It was reported that the Mogadishu Security Plan implemented in May 2019 significantly increased the city’s security profile and contributed to a decrease in IED activities.

Nevertheless, Benadir recorded a distinctly high number of explosions compared to other regions in the reporting period. Illustrative security incidents include, for example, a June 2021 Al-Shabaab suicide bomb attack outside a military base where a crowd of recruits was gathered for enrolment. ACLED reported that at least 40 people were killed and 35 others injured. Targeting by person-borne improvised explosive devices (PBIED) and car bombs was also reported in other public places, such as restaurants, hotels, and an ice-cream parlour.

The assassinations of officials carried out by Al-Shabaab were also reported to result in (other) civilian casualties. On 31 January 2021, for example, Al-Shabaab conducted a complex attack on the Afrik Hotel in Waberi district, where up to 10 people were reportedly killed, including retired army general and former Minister of Defence Mohamed Nur Galal.

Al-Shabaab also launched mortar attacks, many of these targeting the Aden Adde International Airport complex in Mogadishu [Actors, 4.2.3]. Violent incidents at checkpoints were also reported, including clashes between different units of security forces and terrorist attacks by armed groups - the majority of which perpetrated by Al-Shabaab, as well as shootings at three-wheel mopeds and other vehicles for not obeying security forces’ orders to stop [Socio-economic 2021, 1.2.2].

Four attacks on health care personnel or infrastructure were reported in 2020 in Benadir. In one of these incidents in October 2020 two people were killed by explosives, in another attack in April 2020, one person was killed in gunfire.

Assassinations of businessmen and destruction of property were also reported as a means of enforcing extortions.

Security incidents occurred in all 17 districts of Mogadishu with the largest overall number being recorded in Hodan (110 incidents), followed by Daynile (106 incidents).

In the reference period, ACLED recorded a total of 701 fatalities in the region. Compared to the figures for the population in the region as from 2014, this represents approximately 42 fatalities per 100 000 inhabitants.

The volatile security situation in Mogadishu impacts people’s mobility as generally, ‘moving about in the city causes fear and anxiety among city residents’. In addition, a payment of a fee is required to go through the hundreds of checkpoints manned by security forces. Most checkpoints were in the city centre and all main roads leading to the city had checkpoints. For members of marginalised groups, passage was not always possible even though they had the required identity certificates. People also reported fear going through checkpoints because of corrupt police officers or the risk of terrorist bomb attacks [Socio-economic 2021, 1.2.2].

The extortion of businesses and of development projects in Mogadishu by Islamist militants were also reported.

In February 2021, UNOCHA reported that with ‘emergency levels of severity of need’, Benadir was among the worst affected areas for cumulative severity of child protection in 2020, in a context of increased estimated numbers of children in need.

According to UNHCR, the Somali ‘public structures’ were unable to provide ‘protection against crime’. It was also reported that people generally distrusted the police, preferring instead to rely on clan-based militias for their protection.