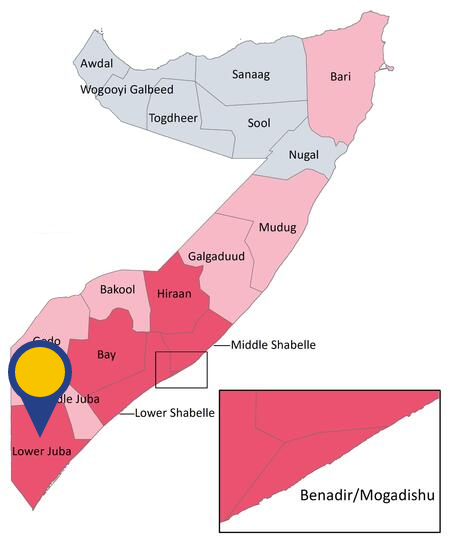 Lower Jubba region is the southern-most region of Somalia and has four districts. The region’s capital is Kismayo.

Demographically, the population of Lower Juba is divided into five sections. In the first section, the Somali Bantu (also known as Jareer) are the main population; the second zone is occupied by the Tunni (Digil-MIrifle); in the third zone there are different Darood clans; the fourth section is inhabited by the Somali Bajuni; and the fifth zone is the Kismayo town where the population makeup is complex with Ogaden clan (Darood) dominating politically, economically, and militarily the city.

In 2014, UNFPA and Somali authorities estimated the population of Lower Juba region at 489 307 inhabitants.

Lower Juba is one of the best endowed regions of Somalia in comparison to other regions. The region’s resources have generated competition and conflict.

The most important actors in the Lower Jubba are the Jubbaland state government, Al-Shabaab, and clan leaders and militias. Jubbaland state has had strong control over Kismayo town and its immediate vicinity, including the international airport. Several other towns in Lower Jubba, such as Afmadow and Dobley, are also under Jubbaland state control. However, the effectiveness of Jubbaland security forces is limited and dependent on the support of the Kenyan-staffed AMISOM forces based in and around Kismayo, as well as on the support from US counter-insurgency personnel.

Most clans in the Lower Jubba maintain an ability to muster a clan militia. The Mohamed Zubeir clan (Ogaden) has the advantage of being the principal clan populating all Jubbaland state security actors. These security actors are considered to be Jubbaland President Madobe’s (private) militia.

The main conflict dynamics affecting this region are the confrontations between Al-Shabaab and anti-Al-Shabaab. Al-Shabaab either controls or influences over most of the hinterland in Lower Jubba. It launches periodic attacks on the Kismayo periphery, and occasionally succeeds in IED or bombing attacks inside Kismayo while its attacks are more effective in the countryside. Al-Shabaab was reportedly the actor of the majority of the security incidents in the region, accounting for 65% of them.

The majority of incidents attributed to Al-Shabaab were armed clashes, followed by the use of remote-control explosives as well as by abductions, forced disappearances or attacks against civilians.

Indicatively, in December 2020, eight or nine civilians were killed, and two others injured when an Al-Shabaab IED exploded in Afmadow district. Earlier, on 11 September 2020, an Al-Shabaab suicide bomber killed between two and six civilians and injured several others in Kismayo district.

Twelve airstrikes by the US military have also been reported in the region resulting in 38 fatalities. Four of the airstrikes have reportedly resulted in civilian casualties. For example, in January 2020, an airstrike by suspected US or Kenyan forces killed three to four locals at a wedding in Afmadow.

In relation to clan conflicts, the Majerteen (Harti/Darood) and Awramale (Harti/Darood), clashed intermittently at the beginning of 2020 causing more than 50 fatalities. However, since April 2020 there has been a ceasefire agreement.

During the reference period, security incidents occurred in all 4 districts of Lower Juba, with the largest overall number being recorded in Kismayo (179 incidents) followed by Afmadow (120 incidents).

In the reference period, ACLED recorded a total of 498 fatalities in the region. Compared to the figures for the population in the region as from 2014, this represents 102 fatalities per 100 000 inhabitants.

Between January 2020 and May 2021, PRMN reported an estimated 42 000 new displacements from Lower Juba, nearly all within the region. Conflict and insecurity were the reasons for displacement in 10 000 cases. Meanwhile, PRMN recorded 2 460 displacements newly arrived in Lower Juba, mainly from Middle Juba.

Based on research conducted in North East Kismayo, decades of conflict have resulted in prolonged distress for households especially with regard to livelihoods and food security. Lower Juba is reportedly on emergency levels of severity of need. The estimate of children in need for Lower Juba had increased by 14.7% in 2020 compared to the previous year.

Humanitarian actors face difficulties in providing assistance due to the volatile security situation and aid workers have reportedly been harassed and abducted. For Lower Juba, 13 incidents of humanitarian workers being unable to access sites were reported in 2020.

Women in the region have reportedly been the most negatively affected by the dire situation created by years of conflict in the country.