Actors of persecution or serious harm include:
a) the State;
b) parties or organisations controlling the State or a substantial part of the territory of the state;
c) non-State actors, if it can be demonstrated that the actors mentioned in points (a) and (b), including international organisations, are unable or unwilling to provide protection against persecution or serious harm as defined in Article 7.

Risks to which a population of a country or a section of the population is generally exposed do not normally create in themselves an individual threat which would qualify as serious harm (Recital 35 QD). Generally, persecution or serious harm must take the form of conduct of an actor (Article 6 QD). For example, it cannot simply be the result of general shortcomings in the health system of the country of origin.[8]

The notion of ‘State’ within the meaning of Article 6(a) QD should be broadly interpreted. It encompasses any organ exercising legislative, executive, judicial or any other function(s) and acting at any level, be it central, federal, regional, provincial or local. It could, for example, include the civil service, armed forces, security and police forces, etc. In some cases, private entities may also be given State powers and therefore be considered a State actor of persecution or serious harm.

Parties or organisations controlling the State or a substantial part of the territory of the State can refer to two possible scenarios:

Non-State actors against whom protection is not effectively provided are also recognised as actors of persecution or serious harm in the meaning of Article 6 QD. Non-State actors could, for example, include individuals and groups, such as militant groups, extremist religious groups, ethnic groups, criminals, political parties, and family members, including members of the extended family, etc.

A wide range of different groups and individuals can be considered as actors of persecution or serious harm in Somalia. Specific relevant examples include Al-Shabaab, security forces at the federal or at the states level, clans and their militias, families, etc.

A crucial aspect of the Somali context is that ‘the boundaries of membership’ for all of the groups dealt with in this chapter constantly shift, and that most individuals playing a role in the security situation are simultaneously members, to varying degrees, of multiple categories. In that way, the coalition of clans and business interests supporting the federal president largely determines the interest of the FGS. The militias and other ad hoc forces supporting the federal president find their action gaining legitimacy in acting as being part of the Somali National Army (SNA). And, generally speaking, a given member of the armed forces has three entities theoretically competing for his loyalty – the clan, the FMS, and the SNA/FGS. [Security 2021, 1.2]

The following subsections highlight the main actors of persecution or serious harm in Somalia in a non-exhaustive manner. The approximate areas of control are outlined in the map below. However, this cannot be seen as a guarantee that the map or its features are either spatially or temporally accurate. Furthermore, the depictions on this map do not imply any opinion whatsoever on the part of EUAA concerning legal status or effective control over any country, territory, city, or area. 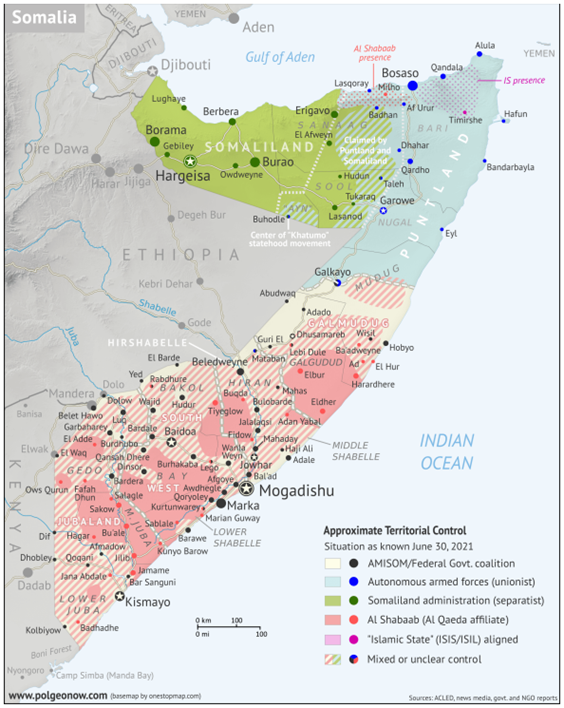 For more information on territorial control and/or presence of the actors of persecution or serious harm listed below, please refer to Assessment by region under Article 15(c) QD.